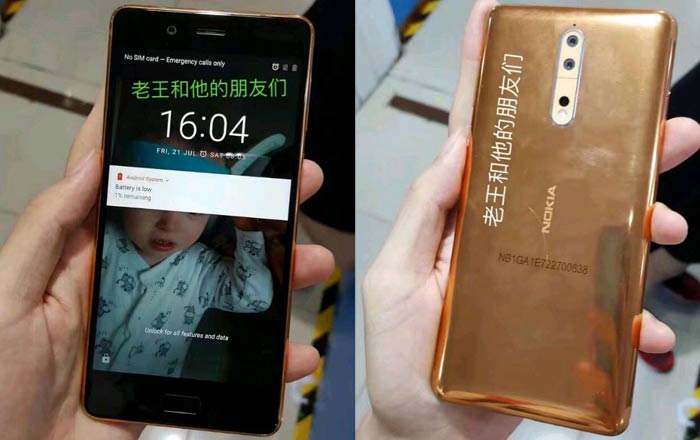 The Nokia 8 is in the news again, this time for the revelation of a copper gold color variant of the smartphone. A Baidu leakster has uploaded several images of the alleged device to show it off from all angles.

To recap, the Nokia 8 recently got leaked in its blue and steel color iterations. There’s reportedly a blue gold model of the handset as well, but that hasn’t been spotted yet. The copper gold version is in line with the aforementioned renders, but notably lacks Carl Zeiss branding on its back.

It’s possible the unit is a working prototype. It clearly has a pair of dual cameras on its rear surface. Both are rumored to feature a 13MP resolution. Up front, the screen has been lit up to showcase the UI. The interface is probably based on Android 7.1.1 Nougat, keeping in line Nokia’s pure Android philosophy.

The top portion of the alleged Nokia 8 plays home to a 3.5mm headphone jack, while the bottom features a microUSB port. If the latter is indeed present then it might be considered a disadvantage since most flagship handsets feature a USB Type-C slot with fast charging abilities.

A Snapdragon 835 processor might find its way inside the Nokia device, supported by an ample 4GB, 6GB, or 8GB of RAM. Other rumored specs include a 5.3-inch QHD screen, 64GB of storage, and a 13MP selfie shooter.