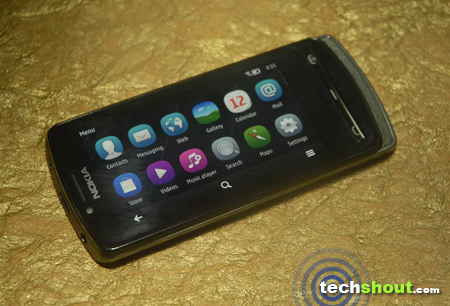 The Nokia 700 smartphone we picked up for a review is valid proof that deep down inside, the Finland-based mobile manufacturer still has a lot of love for its home-brewed Symbian platform despite its commitment to Microsoft’s Windows Phone OS. The question that is likely to be bobbing around in most heads is ‘Why purchase such a device when the company is expected to abandon it over the course of time?’. We might not be in a position to answer that, but Nokia will most probably continue providing support and updates for this OS through 2016. So if you’re curious to know what capabilities this handset holds, we’ve conducted an analysis focusing on some of the most essential offerings provided by the Nokia 700 and Symbian Belle. 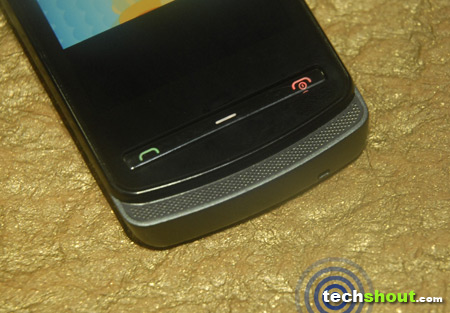 Nokia seems to have done nothing great with the package that bears one of its very first Symbian Belle smartphones. In fact, the bundle is more like a miniature pizza box sent over from Dominoes. Well, one thing’s for certain, we’re not going to find any pepperoni and cheese in here. A tasty slab of Nokia 700 accompanied by a microUSB cable for data transfer, a charger and non-tangle, flat-ribbon earphones as toppings, were what our stomachs craved for. The parcel delivered just these along with a quick user guide that’s accompanied by a special gift hidden inside as well as a small booklet comprising of some safety information. 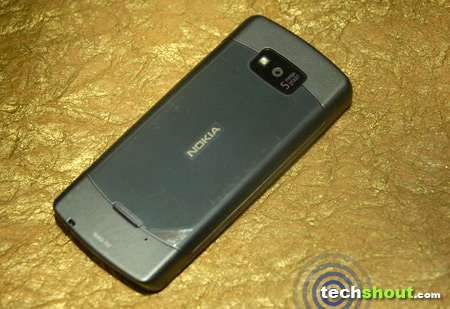 Unlike other devices such as the N8, N9 and even the Lumia range, the company seems to have settled for a different type of look altogether on the Nokia 700 and its other two companions, the 600 and 701. If you were to ask us, this handset appears to portray somewhat of a slide-up build where the display has to be pushed upwards to unveil the keypad. Well, there’s no physical keyboard here and thanks to the speaker located on its lower end, anyone can make a mistake. We’re not saying that the design isn’t good enough for modern standards, but the 700 gives us that feeling of déjà vu in terms of design. Weighing just 96 grams, this smartphone is built around a lightweight form factor and flaunts a sleek exterior. 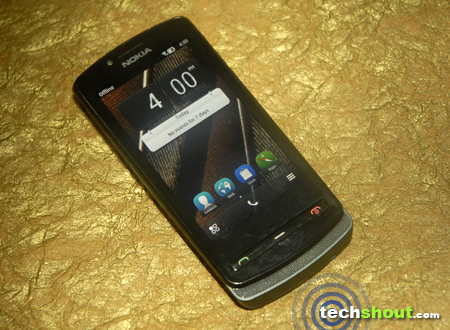 As we started to get acquainted with the device, we came across physical buttons such as those for Call, End and Home on the front along with the screen lock and camera as well as volume controls on its right. Whilst resting on its front, the rear showed a 5MP camera that possesses an f2.45 lens with a focal length of 4.3mm. Compared to other devices that hoard similar specifications, this one is equipped with a 1GHz ARM 11 processor, 512MB of RAM, a 3.2-inch nHD AMOLED touchscreen with ClearBlack technology and a resolution of 640 x 360 pixels. All of these fit within dimensions of 110mm x 50mm x 9.7mm. The device is also accompanied by a USB 2.0 port and Bluetooth 3.0 as well as Wi-Fi connectivity, a 3.5mm AV connector with TV-out capabilities and NFC for easy sharing. 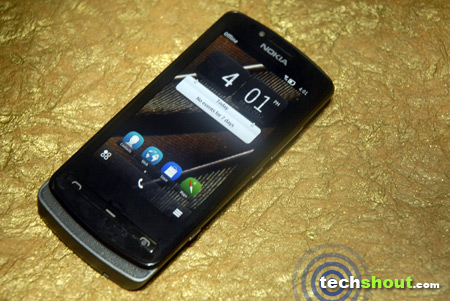 Since Symbian Belle was running the show on the 700, we took a quick whirl through the interface. Not much had changed from prior versions of the OS and the most noticeable difference was that the icons had been revamped with more eye-catchy and vivid ones. There was also a transparent layout which did away with the pale black background we’ve seen in its predecessors. Scrolling through the menu was smooth until every user’s nemesis came along. Yes, we’re referring to lags. And not just a little here and there, but pretty frequent ones, especially when a few apps were running in the background. Well, we have to admit that the new Belle-powered smartphone series has some of the best Symbian devices we’ve seen roll out from Nokia. Whilst the OS sits well on the Nokia 700, a few tweaks could enhance the experience to a much higher level. 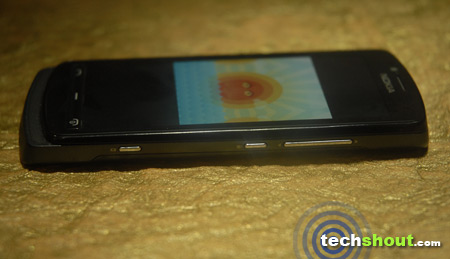 When it comes to the performance and battery life of the Nokia 700, there’s a lot to talk about. Firstly, the screen is highly responsive, but in some cases we had to inflict a hard tap or two to get things moving. We actually found that typing on the 3.2-inch display was rather more convenient than anticipated. One thing Nokia is known for is its voice calling quality and there seemed to be no complaints on that front. In fact, the built-in speaker emitted a comfortable output level that wasn’t harsh on the ears even at full volume. Being a mid-range smartphone, we didn’t expect it to deliver too much performance-wise. At the same time, gaming wasn’t a problem here. What’s surprising is that we managed to go through all our tests in just a single charge. That includes almost two hours on Wi-Fi for web browsing and downloading apps, capturing a few images and HD videos with the 5MP rear camera, some casual gaming and heavy music-listening sessions. All of these activities left the 1080mAh battery a little lower than halfway to the empty mark.

This Belle handset’s sleek form factor gives out a durable feel and is well crafted.

We managed to snap up a few clear images through the 5MP camera and kept ourselves occupied with this diversion for quite some time.

The Symbian Belle OS brings in a variety of new capabilities compared to prior Symbian releases.

Viewing videos and images on the 3.2-inch display was pretty entertaining.

Applications take a while to open and at times, some even exit to the menu or homescreen.

Instead of physical buttons, capacitive touch ones would have made things more convenient.

Websites load really slowly and most often, Flash content didn’t even show up in spite of the Flash Lite 4.0 integration.

The screen is highly responsive, but in some cases we had to inflict a hard tap or two to get things done.

Wrapping up everything, the Nokia 700 only manages to bring in a bagful of features. Performance-wise, it seems to lack in effervescent charm, notwithstanding a decent hardware offering. But owing to the device size and the list of capabilities it’s accompanied by, the offering has managed to steal an 8 out of 10 rating from us. If you’re planning on picking up this Nokia baby, you can do so for a little over $300 or Rs. 18,099.