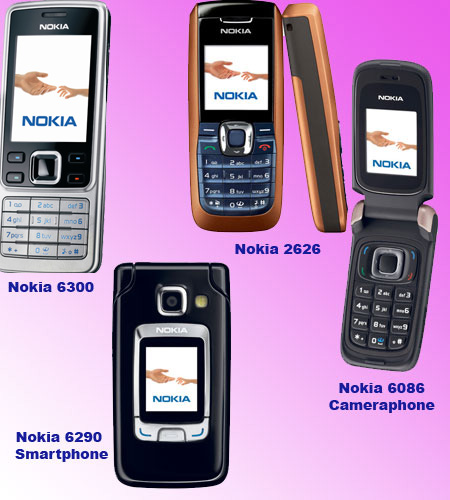 On the occasion of the annual Capital Market Days held at Amsterdam, Nokia announced four new mobile phones on Tuesday. Amongst the newly introduced phones three are mid-range models, namely the Nokia 6300, Nokia 6290 and the Nokia 6086. The final one is the Nokia 2626 which targeted to consumers in entry markets. All four models are expected to begin shipping in the first quarter of 2007.

Kai Oistamo, Executive Vice President and General Manager, Mobile Phones for Nokia unveiled the new models along with the company’s vision for the next year. Oistamo said, “These new products underscore our commitment to offer a range of mobile phones that give consumers a choice in selecting the right balance of technology and design to meet their lifestyle and budget.”

First and foremost is the Nokia 6300, a mid-range model that represents an evolution of the modern monoblock design. Less than 13.1mm thin, the slim Nokia 6300 has a stainless steel frame that adds both design interest and strength to this model. Apart from its organic curves and appealing design, the Nokia 6300 offers a robust range of easy-to-use features. The estimated retail price of the Nokia 6300 is €250 before subsidies or taxes.

Second on the list is the Nokia 6290 Smartphone, which blends the collective power of S60 3rd Edition and 3G in an easy-to-use, attractively designed package. It supports a number of practical new features, multiple alarms and handy Quick Cover access keys which enable instant access to a wide range of the device’s useful features, including an interactive world travel application. The estimated retail price of the Nokia 6290 is €325 before subsidies or taxes.

Next is the Nokia 6086 Cameraphone through which its users can stay in touch – in any environment. This quad-band GSM and UMA-enabled cameraphone hides its sophisticated circuitry in a classic design with a large keypad and intuitive user menu. The estimated retail price of the Nokia 6086 is €200 before subsidies or taxes.

And finally the Nokia 2626 is a colorful mobile phone designed for style-conscious consumers in emerging markets. The Nokia 2626 will be available in a range of bold colors, such as Fiery Red and Spatial Blue, and includes an FM radio for music on the go. The estimated retail price of the Nokia 2626 is €75 before subsidies or taxes.