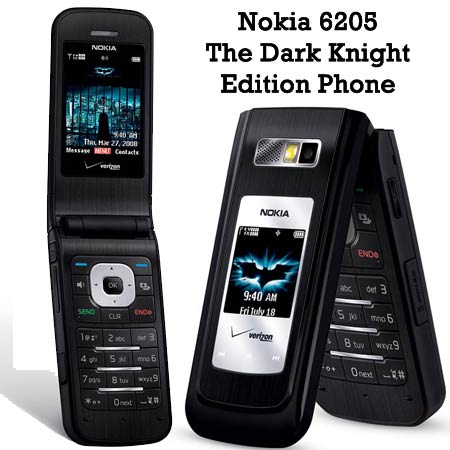 Verizon Wireless has launched Nokia’s 6205 The Dark Knight edition mobile phone through its network. The mobile phone is dedicated to the movie The Dark Knight which is releasing on July 18. The special edition phone will be available online at www.verizonwireless.com beginning Sunday, June 15.

Moreover, the phone features Touch-sensitive external music keys that give simple access to the tracks purchased from Verizon Wireless’ V CAST Music service. Also, the phone is equipped with a 2-inch display that supports up to 262,000 colors.

A 1.3 megapixel camera with flash and 4x digital zoom, 58 MB internal memory; expandable up to an additional 4 GB with an optional microSD memory card and Get It Now-capable for downloading games, ringtones, wallpapers and other mobile content are some of the other features of the Nokia 6205.

Also, the phone supports VZ Navigator, which is compatible for audible turn-by-turn directions and location information. Users can also access the latest news, sports, weather and more through the web in the latest phone. Further it includes Voice dialing and voice commands for touch-free phone operation, built-in speakerphone and Bluetooth.

The Nokia 6205 The Dark Knight edition will be available online for $69.99 after a $50 online instant rebate with a new two-year customer agreement.