The Nokia 6 (2018) has been at the center of attention for a few weeks now, with speculation hinting that the handset will finally be coming out on January 5. The phone recently got leaked on Weibo and teased by a retailer.

Going by the image above, the Nokia 6 (2018) is sticking to its original 16:9 aspect ratio with slightly slimmer black bars at the top and bottom. This might come as a disappointment to anyone who’s been following the smartphone on its leak journey as previous reports had pegged an 18:9 aspect ratio due it having narrower bezels than before.

Specifications leaked out by TENAA indicate that a 5.5-inch full HD display is likely going to be present up front. The photos which have gotten leaked hint that HMD Global has removed the home button from its usual spot and moved the navigation buttons to the screen. 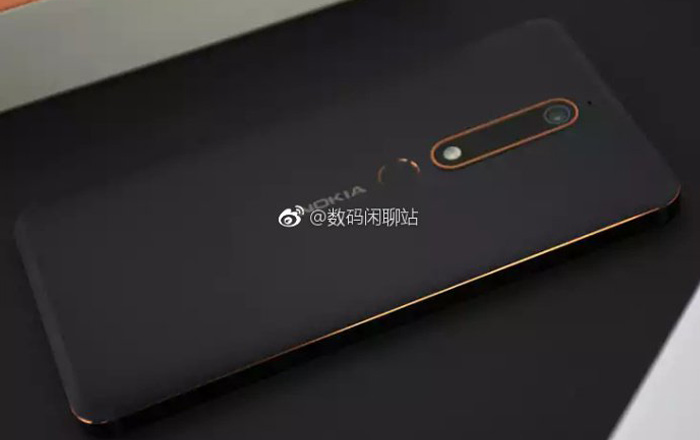 The Nokia 6 (2018)’s fingerprint scanner has relocated to the back as a result of this elimination. There’s a stylish orange accent all around it. The same design has been applied to the single camera module, another let-down from the dual snappers promised by earlier rumors.

The upcoming Nokia smartphone might get updated with features like a Snapdragon 630 processor, 16MP primary shooter, 8MP secondary lens, and 3000mAh battery. The camera setup is the same as the 2017 edition, but it might have new apertures and pixel size.

HMD Global hasn’t said anything official about the Nokia 6 (2018) coming out on January 5. A Chinese vendor named Suning has been busy releasing teasers about the launch though, so it just might make its debut tomorrow.