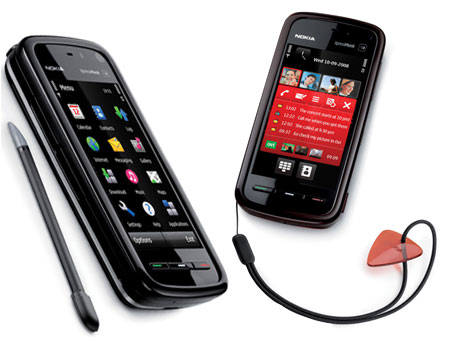 The rumors of Nokia launching a touchscreen phone has come true. However, the phone is not called Tube as speculated earlier, rather it is named as 5800 XpressMusic phone.

The touch-screen phone from Nokia comes with one year of unlimited access to Nokia’s music service.

The 5800 XpressMusic handset is quite similar to the iPhone in looks. It sports a 3.2 inch, nHD 640×360 resolution touch screen display and integrates a variety of input options including a virtual alphanumeric keypad, a virtual computer-style QWERTY keyboard, a pen stylus and a plectrum for true music enthusiasts.

The handset features a 3.2 megapixel camera with Carl Zeiss lens. Users can also share the captured images and videos immediately through Ovi, Flickr, or Facebook easily with a single touch.

Due to the incorporated touchscreen technology, the Nokia 5800 XpressMusic offers a Media Bar feature, which is a handy drop down menu that provides direct access to music and entertainment, including favorite tracks, videos and photos. Also the phone supports Flash content, delivering a better surfing experience to users.

It also includes a Contacts Bar feature, which allows users to highlight four favorite contacts on their home-screen. In addition, users can track the digital history of recent text messages, emails, phone logs, photos and blog updates through a single touch.

Commenting on the new arrival said Jo Harlow, Vice President, Nokia said, “As Nokia’s first mass-market device with a touch screen, the Nokia 5800 XpressMusic turns a ‘user interface’ into a ‘human interface’ by truly putting people first. For example, we’ve introduced the Nokia Contacts Bar, which is like a digital RSS feed on your life,” said Harlow.

“By adding the benefits of touch screen technology to S60, the world’s leading smartphone interface, Nokia is taking the familiar and giving it a human touch. We have used touch technology where it really adds value such as the Contacts Bar, Media Bar and clever shortcuts from the homescreen to menu items such as calendar, profiles and clock,” added Harlow.

The Nokia 5800 XpressMusic will be available worldwide in Q4 of 2008 for the price of 279 EUR before taxes and subsidies.