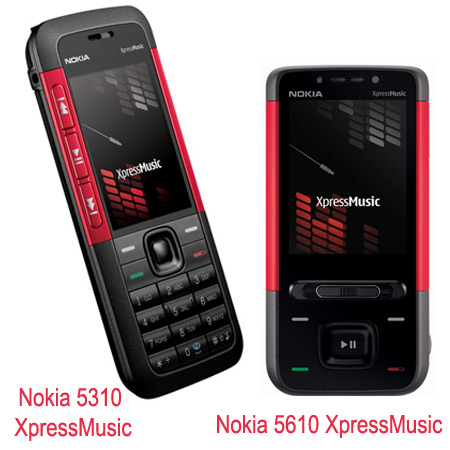 Nokia has announced the availability of Nokia 5610 and Nokia 5310 XpressMusic mobile phones, in India. The latest entrée in the mobile phone giant’s XpressMusic collection, have apparently been optimized for a superior music experience and sports an impressive iconic design.

Devinder Kishore, Director Marketing Nokia India stated, “Recognizing the increasing role of mobile phones in music consumption, Nokia created the XpressMusic platform in its mobile phones. We have since expanded the portfolio under this platform and introduced devices that are high on style and music features. We are confident that our new full-featured and well-designed offerings – Nokia 5610 XpressMusic and Nokia 5310 XpressMusic – will be very popular and connect us even more strongly with our consumers.”

The Nokia 5610 has the capability of playing music non-stop for as much as 22 hours. The device incorporates a music slider key making music easy to access with a flick of the thumb. It has aluminum side panels having an all-black high gloss finish. The other key features of the Nokia 5610 XpressMusic mobile phone are:

The other release, the Nokia 5310 is available in two funky colors red and blue and comes with 18 hours of playback time. Embellished in a sleek aluminum finish, the other features of the Nokia 5310 XpressMusic phone are: