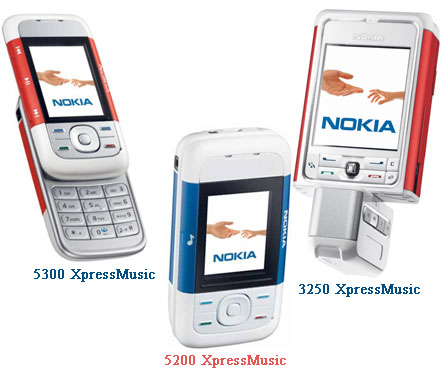 Nokia has introduced its XpressMusic range of music phones that are a perfect amalgamation of excellent mobile communication and perfect mobile music. 5300 XpressMusic, the 5200 XpressMusic, and the 3250 XpressMusic are Nokia’s latest offering.

This – being the latest addition to yesterday, when Nokia unveiled music editions of three of its Nseries multimedia computers; namely the N70 Music Edition, the N73 Music Edition, and the N91 8GB phone.

Speaking at the launch, Heikki Norta, senior vice president – mobile phones, Nokia, said, “With today’s launches, we are reaching out to a broad range of consumers, who want both the features of a modern mobile phone and a quality music player in a single, stylish device.”

“The Nokia 5300 XpressMusic, in particular, offers a comprehensive feature set, including support for up to 2 GB of memory and dedicated music keys at an accessible price. Never before has it been as easy or affordable for consumers to own a mobile phone that also offers a first-rate music experience that compares favorably to any stand-alone music player. With this product launch, we are emphasizing the benefits of the XpressMusic feature brand, which clearly labels those Nokia devices that guarantee an outstanding mobile music experience.” Norta added.

The main model of the XpressMusic series is 5300 XpressMusic, which has a stylish slide design, and holds up to 100 music albums that is roughly about 1,500 tracks on a 2GB microSD card. The phone makes possible controlling music playback whilst SMSing, browsing, or clicking pictures, thanks to the dedicated music keys.

With the help of an inbox adaptor, headphones or external speakers can be easily plugged-in to the phone. While, using a standard micro USB connector, the phone can quickly transfer music to a PC. With the Nokia Wireless Audio Gateway AD-42W, consumers can stream music wirelessly from their phone onto any stereo.

The Nokia 5300 XpressMusic is expected to retail for approximately 250 EUR (Rs 14,500) before taxes and subsidies.

Out of the two other phones in the XpressMusic range, the Nokia 5200 XpressMusic is pretty similar to the 5300 with respect to its design. The features are a mix of music and messaging functions.

The Nokia 3250 XpressMusic maintains the unique “twist” design, and stores up to 1500 tracks on a 2G microSD card.

This phone will be available for a retail price of about 400 EUR (Rs 23,200) before taxes and subsidies.

All three XpressMusic phones are scheduled to ship within a few weeks.