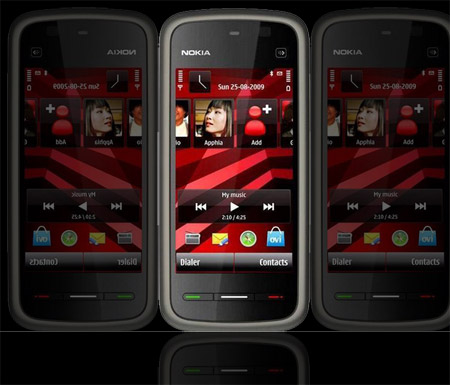 Until a few years ago, touchscreen phones were generally attached with higher price tags. Today it’s a completely different story and touch-enabled handsets are no longer the arm candy of just the elite. With manufacturers like Samsung coming out with their affordable yet efficient touchscreen phones the Corby series to be specific, there seems to be a touch phone for everyone. Well, Nokia too ventured the low-price touchscreen phone space with the new Nokia 5230 and 5233 devices.

One of these nifty phones, the Nokia 5233 is what we’ve recently reviewed. The mentioned phone is claimed to be the cheapest Nokia touchscreen handset and a run through the feature list or citing similarities with the 5230 or any other Nokia touchscreen phone didn’t really excite us. So we’ve just scanned through the phone independently. The phone arrived in a rather attractive box with patterns similar to the Ovi logo on the exterior. Our enthusiasm died down however when we opened the box as there were hardly any accompaniments.

The bundle simply included the 5233 phone in black color along with a power adapter, earphones, a fancy plectrum stylus, a 10 track Nokia Music Store voucher and the User Guide. We were pretty livid with the absence of a USB cord and a memory card. Nevertheless highlights among the feature list were the 3.2” touchscreen display with a resolution of 640 x 360 pixels, 16:9 widescreen with landscape navigation, 3.5mm AV jack, 2-megapixel camera, access to Ovi store and customizable homescreen. There’s Bluetooth support too though Nokia didn’t fancy putting in Wi-Fi in this phone. A media key next to the Nokia logo on the right top corner of the screen offers a shortcut to multimedia applications.

Moving on to the fabrication, the phone sports a plastic chassis, the front edges of which don a steel black hue while the rest of it is painted in a neat shade of black. The front face of the phone is austere with just the large touchscreen and three slim buttons at the bottom. The anterior appearance of the handset was actually quite similar to the recent Nokia N97 Mini that we detailed. The left button for call answer/dial illuminates green while the center one is the menu button and lights up in white. The last button in this row is the call reject/back button that shines red. The phone felt quite bulky in the hands and is distinctly designed into three compartments. Between the front and back panel are two slots one for memory card and the other for the SIM card that take up quite a lot of space.

We failed to comprehend though why the Finnish giant has offered a SIM card slot that’s so inconvenient. Inserting the SIM was quite a task – open the back panel, remove the battery, open SIM card slot and insert SIM card, close the slot and be scared that the SIM won’t come out easily! Well, that’s exactly what ensued at our end. The slot was not just bothersome but could also scare the daylights out of novice mobile users. The right brim included a volume control button, followed by a keyguard switch and a dedicated camera key. Toss the phone over and a neat back panel welcomes you with just Nokia inked at the left edge and the camera lens infused at the top. The back panel also includes a speaker along one edge. The uppermost portion of the handset includes a USB port, the headphone jack and charging pin followed by a power knob.

Switching on the phone takes you to a very responsive touchscreen that is quite alive. Though the screen wasn’t that efficient when we used our finger, it seemed to work brilliantly with the supplemented stylus. The screen takes quite some time to switch from the landscape to the portrait modes and vice versa though. Among the themes, the General one lets you pick your preferred color while the Menu can be viewed in either the Grid or List option. The Home Screen theme lets you choose your homescreen layout from among the basic, shortcut bar and contact bar options. Personalizing the homescreen is also a breeze allowing you to set a maximum of 4 shortcuts from among the features in the menu. Besides, you can also choose to keep the homescreen to a bare minimum by ticking off the contacts bar and shortcuts option. You can also opt to have email notifications visible. 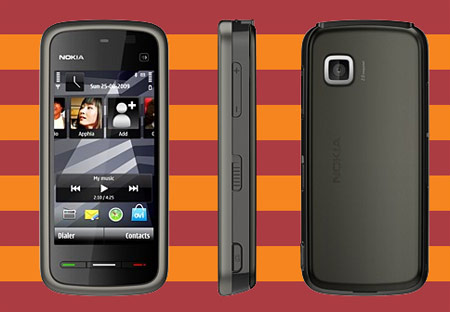 While being able to tweak the brightness of the display, we also had fun playing around with the large, normal and small font size options. Another interesting feature that got us all perked up was the ability to assign Voice commands to the phone’s functions. You can set the voice command to a word for effortless operation of functions. We could even choose to turn the sensor off while choosing how we wanted the turning controls to work. Here, you can even tick off the auto-rotate display option if you’re not too comfortable with the screen changing its orientation at its own will. The touch input setting besides the regular ones also bundles in a handwriting training attribute that actually lets you save alphabets enabling the phone to recognize the alphabet accurately when you use the handwriting feature. Also for correct responses, you can choose your pen trail width to be thin, normal or thick. There’s an option to keep adaptive search on or off too. The phone settings further include the Phone Switch application that lets you transfer content seamlessly between compatible Nokia phones.

While there are two ways to type in text either using the Handwriting option or the alphanumeric keypad, there’s also a touch QWERTY keypad that’s pretty efficient with its large keys in the landscape mode. However, the typing options were pretty confusing when we were surfing the Internet. And speaking of Internet, loading of web pages seemed to have taken forever and was not something we were expecting. The phone does however wrap in quite a plethora of Internet settings which give you the feeling your surfing the net on the computer. You can choose to browse the Internet either through WAP services or through Mobile Office. The integrated Facebook application takes you straight where it should with no interruptions involved. When on the web, there’s an icon that lets the search tool to be dragged to any other location on the screen. However when we actually tried shifting it, the tool decided to spread itself all over the screen much like when a window on a PC freezes.

On the music front, the least Nokia could do we think is bundle in better headphones. Yes, we’re still actually reminiscing the earphones tagged along with the N97 Mini. The phone is supplemented with standard earphones that are plain old boring. Thankfully music is sorted on the basis of artists, albums, playlists, genres and composers and the obvious podcasting feature is also onboard. When we plugged in the headset to detail the incorporated radio however, we were pleasantly surprised to find the phone’s automatic scanning to be really quick. It saved around 23 stations in a jiffy. Though most of the channels came with disturbances and we had to manually fine tune them, it was one fast automatic scan we’ve seen in a long time.

There’s also a Maps function that should prevent you from straying away when in unknown locations. While being able to pick your Map mode, you can also choose Favorites from among the locations navigated. The application also remembers places visited by you and stores them in History. The phone wraps in just one game namely RollerCoaster Revolution. We reached up to level 10 and the engaging game sure made our boring traffic wait times more fun. The game was exciting and exploits the motion sensing capabilities of the phone to the maximum. The incorporated Office tool on the other hand lets you manage files and employ the dictionary, converter or write notes. A Video Centre in the Applications list gives a dope on videos in Nokia Music. You can even receive feeds for the latest videos. Obviously Nokia couldn’t have possibly left out their Ovi store that comes complete with a range of interesting features. The phone additionally includes a location application that includes landmarks, GPS data and positioning information as well.

The 2-megapixel camera was just above average in terms of image quality. It does however proffer a bevy of attributes that photo enthusiasts fancying their phone as their latest imaging weapon can use. Some of these features include switching to a video mode, self timer, color tone, white balance, exposure, light sensitivity, contrast, sharpness and sequence. Scene modes packed in include Automatic, User-defined, Portrait, Landscape, Sports and Night. The image quality interestingly could be set to a maximum of 2M-Large that can be used ‘for prints of up to 7×5 in’ as Nokia puts it. Those who strongly believe in sharing their every move can even choose to keep GPS info on for the captured image. Shockingly, when we exited from the camera to the main menu and tried getting back to the camera, the screen flashed weirdly (and it happened quite a few times).

The screen is large and bright making it great for watching videos. Besides, it’s also easy to set up the homescreen while the touchscreen responds very well with the stylus.

The audio quality offered by the phone is definitely above average and should keep music buffs entertained.

The phone’s battery was more than satisfactory. We went for nearly two days on a single charge.

Without a doubt, the handset is priced very intelligently.

The phone’s design was not too user-friendly as it seemed to slip off the hands too often. Though the phone fits well in the palm, the surface does not offer a good grip.

With nearly all the features of a smartphone, we wonder what made Nokia give Wi-Fi support a miss.

Also if there’s a USB port, a USB cable is a must. Are manufacturers listening?

The Nokia 5233 will certainly fit the bill for dedicated Nokia fans on the look for a touch phone tagged at a lower price. It should also appeal mobile users who are new to the touchscreen genre with its simple interface. If you don’t give much of a thought to the way your phone feels and are just worried about its performance, the 5233 won’t be a bad investment at all. After all it’s not always that you can buy a complete touchscreen smartphone for Rs. 7800. We’d rate the phone 8 on a scale of 10.