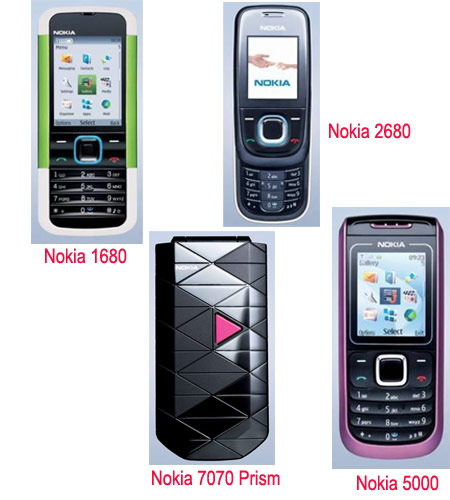 In its move to pace up the sluggish market growth in Europe and North America, mobile phone giant Nokia has introduced four new handsets that have been specially designed to let customers in developing markets bid adieu to their old phones and replace them with the newly launched ones.

Nokia 5000, 2680, 1680 Classic and 7070 Prism are the latest phones from the Finnish company. Priced between 50 euros and 90 euros, the devices include basic features such as FM radio receivers and recorders, cameras, and music players, to encourage consumers to upgrade.

Nokia 5000 is the company’s very first sub-EUR100 megapixel camera-equipped phone and incorporates key functions like FM radio with recording capabilities, E-mail, and General Packet Radio Service, or GPRS, connectivity. Priced at EUR90, Nokia 5000 will ship in the second quarter of this year.

Nokia 2680 is Nokia’s first slide model targeted at developing markets and is a camera phone with FM radio with recording functionality. Retailing at EUR75, Nokia 2680 will ship in the third quarter.

Nokia 1680 Classic comes with a VGA camera, E-mail, and phone sharing functionality. It will ship in the second quarter for EUR50.

Nokia 7070 Prism is a flip phone that boasts a voice recorder, handsfree speaker, plans to ship in Q3 of 2008 for EUR50.