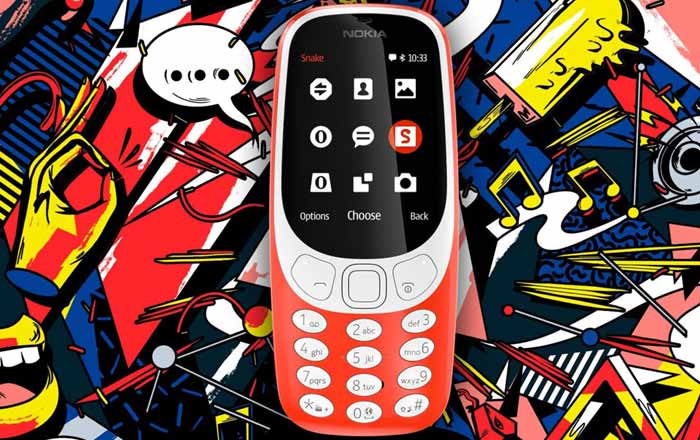 It’s been a long wait, but Nokia Mobile has finally returned to India after months of nostalgia-fueled anticipation. The first handset out of the gate is the 2017 edition of the Nokia 3310.

The Nokia 3310 (2017) will set buyers back by Rs 3310, a tongue-in-cheek price tag. It’ll be sold via offline outlets across India starting from May 18. The revamped feature phone is going to be available in red, yellow, blue and grey colors. The first two offer a glossy finish, while the latter two opt for a matte finish.

Nokia touts that the handset’s 1200mAh battery can last for up to 22 hours of talk time and a month’s worth of standby time. It’s also playing up the Snake nostalgia factor, bundling an updated color version of the iconic game. The UI has gotten the same treatment, running on Nokia Series 30+ with a few changes.

The dual-SIM 3310 carries a tiny 2.4-inch display that’s been polarized and curved in order to ensure better readability in sunlight. There’s only 16MB of storage inside, so users will have to invest in a microSD card if they require space for their media.

In terms of photography, Nokia has blessed its feature phone comeback with a very basic 2MP camera on the rear. It’s accompanied by an LED flash unit to light up images in the dark and serve as a torch. Connectivity is restricted to 2G networks and there’s support for Bluetooth 3.0 with SLAM.