Nokia’s back with a trio of Android handsets and a brand new 3310 feature phone to tug on consumer nostalgia. HMD Global unveiled the 4 at the MWC 2017 where it also announced that all Withings products would be officially rebranded under the Nokia name.

Starting off with the Nokia 6, the offering is priced at EUR 229 (roughly $242 or Rs 16100). The global variant of the device has almost the same features as the Chinese one except that its memory specs have been reduced from a 4GB/64GB combination to a 3GB/32GB one.

For those who’d prefer the higher configuration, there’s a limited edition Arte Black version which switches to a glossy body and EUR 299 (roughly $316 or Rs 21000) cost. One of the key things which distinguish the Nokia 6 from other affordable smartphones is the fact that it runs on a pure version of Google’s latest Android 7.1.1 Nougat OS without the weight of bloatware dragging it down.

Also See: Nokia 8 shows up online ahead of launch

Nokia’s also promising to deliver regular updates, but we’ll have to wait and see whether it follows through on that. This clutter-free Android philosophy extends to the other launches of the day as well. The Nokia 5 will set buyers back by EUR 189 (roughly $200 or Rs 13300) and is a slight step down from its higher-numbered sibling.

Differences include its 5.2-inch 720p screen, 13 MP rear camera equipped with PDAF and dual-tone flash, and a 2GB/16GB setup. Design-wise, the Nokia 5 has been carved out of a block of aluminum that has antenna lines at the top and bottom to give the rest of the body an unblemished look free of lines.

Coming to the entry-level Nokia 3, the basic offering will go for EUR 139 (about $147 or Rs 9800). The smartphone serves up a 5-inch HD display, 8MP autofocus shooters on the front and back, 2650mAh battery, Android 7.0 Nougat, and a quad-core 1.3GHz MediaTek MTK6737 processor. It’s been made out of polycarbonate and features an aluminum frame. 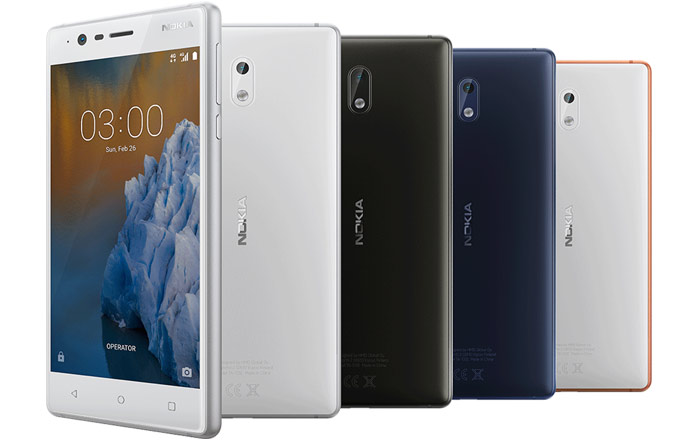 Finally, the Nokia 3310 is making a comeback in a variety of colors. The brand says that it took the iconic look of the original and updated it for 2017, furnishing it with a new UI that recalls the handset’s roots. Specs include 16MB of ROM, Nokia Series 30+ OS, up to 32GB of expandable storage, a 2.4-inch QVGA color screen, and a 2MP rear snapper.

HMD is looking to appeal to potential buyers by highlighting the 3310’s 1200mAh battery. The unit is supposed to last for 22 hours of talk time and a month’s worth of standby time. There’s also the nostalgia factor of having a colorful new version of Snake to play as a game. 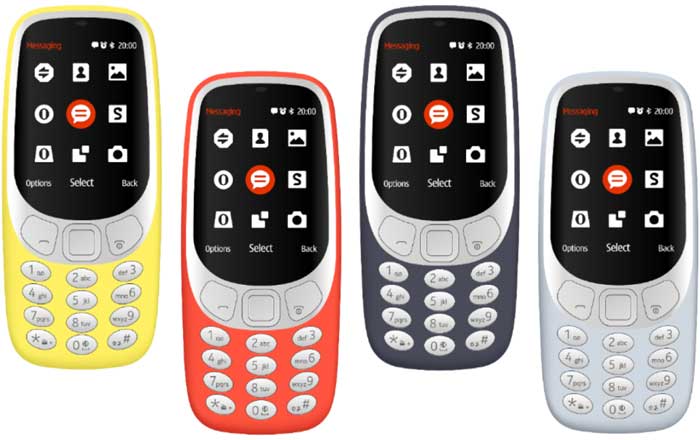