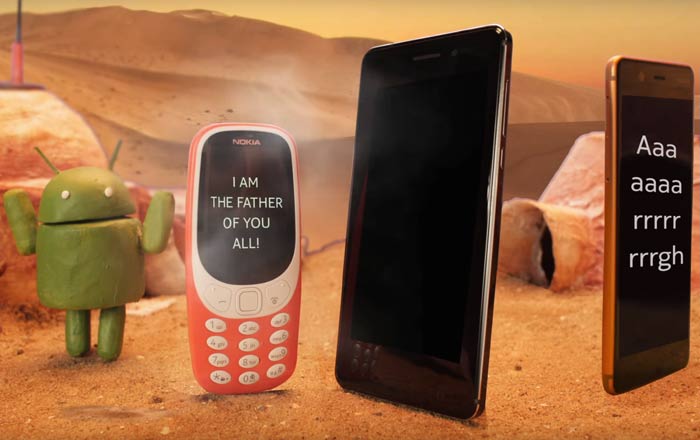 Nokia’s finally ready to kick things into high gear when it comes to releasing its slate of Android smartphones and one feature phone. HMD Global, the brand behind its comeback, has released a new teaser to commemorate Star Wars Day and sent out invites in India for an event on May 8.

Star Wars Day is an unofficial holiday celebrated every year on 4 May since it’s fun to say ‘May the fourth be with you’ to fellow fans. Nokia decided to get in on the festivities by uploading a short video where its upcoming phones are under attack in the Star Wars universe and quoting lines like ‘I am your father’ (Nokia 6) and ‘I AM THE FATHER OF YOU ALL!’ (Nokia 3310) at each other.

It’s pretty fun, but offers little in the way of substantive information. That came later in the form of YouTube comments and Twitter replies to eager fans from all across the world. The overall consensus is that Nokia will begin its global rollout between May and June this year.

We already knew this through third-party retailers in Europe and the UK, but it’s nice to get official confirmation nonetheless. As for India, HMD Global has some concrete plans for the subcontinent. It recently began issuing invites which asked the media to meet for a conversation with the company’s Chief Product Officer Juho Sarvikas on May 8.

This sounds fairly vague, but it can be taken as a sign that HMD is ready to unveil specific timelines for the arrival of the Nokia 3, Nokia 5, Nokia 6, and Nokia 3310 in India. Stay tuned for more on the company’s roadmap ahead.