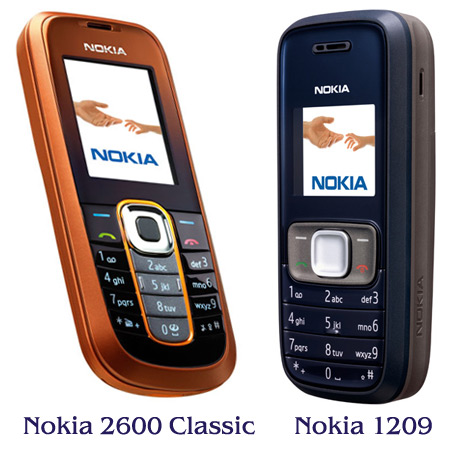 Finnish mobile phone giant Nokia has launched the all-new 2600 classic and 1209 handsets. Incorporating a plethora of features, colors and exchangeable covers, the two new phones are ideal for users who are seeking to have the most basic and key features in their devices.

The other basic phone introduced is the Nokia 1209 that includes a pre-paid tracker, a cost-tracking application, and the multiple phonebook thanks to which up to five people can store their personal contact lists of up to two hundred numbers on a single phone. Appropriate for first time users, the Nokia 1209 features the company’s intuitive user interface, dust resistance, and offers up to 80 languages. In addition, it includes a one-piece keymat for resilience and reliability.

Alex Lambeek, Vice President, Entry Devices, Nokia said, “While cost sensitivity is an important element in creating mobile devices for emerging markets, the overwhelming feedback we receive from consumers in these markets is that they want their mobile device to complement their personality and offer a range of colors and entertainment features.” Adding, “The Nokia 2600 classic offers a colorful sense of flair and a robust set of features at an exceptionally accessible price. As with all Nokia devices, it is backed by a brand that stands for quality and durability.”

Speaking about the key phone sharing feature, Lambeek said, “Phone sharing is a logical trend – more and more families are purchasing a mobile phone for the entire family to use, not just the head of the household. In addition, digital cameras are quickly becoming more popular in these markets, and as such taking and sharing digital images is becoming more common.” Continuing, “In response, Nokia has developed a number of innovative features like the multiple phonebook to support phone sharing, and we have added technologies like Bluetooth to some models to make transferring images and ringtones easy and affordable.”