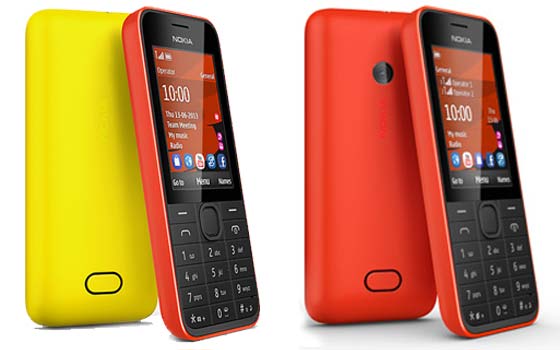 The recently launched Nokia 207 and 208 handsets are old-school when it comes to design, yet alluring with new features which are mainly internet oriented and attractive price tags. It’s clearly evident that Nokia wants to spread its reach in every possible price segment by offering a plethora of choices in smartphones and feature phones.

Like QWERTY handsets, the classic candybar form factor isn’t about to call it quits. According to the Conversations blog, the Nokia 207 and 208 are closely related to each other in design and specifications. However, the latter does have a few extra perks like a specific variant with Easy Swap dual SIM card slots and a 1.3MP camera with voice-guided self-portrait, sequential shot and panorama.

The former however, will arrive with a single SIM housing. And there’s no rear snapper which makes it a decent pick for those working in places where camera phones are banned for security concerns. As simple and basic as the Nokia 207 and 208 may look, the fresh additions to the company’s lineup are designed with rich features including 3.5G HSPA cellular support for snappy internet speeds.

Furthermore, they come preloaded with the Xpress Browser with data compression, YouTube video streaming and access to popular services like Facebook, Twitter, WhatsApp and more. The Nokia 207 and 208 each don a 2.4-inch QVGA display on the front along with a numeric keypad. On the inside, there’s 64MB of RAM, 256MB of flash storage, a microSD card slot with 32GB support and a 1020mAh battery. All phones can deliver approximately 12 hours of 2G talktime, 500 hours of 3G standby or 29 hours of music playback.

The 207 and 208 handsets from the Finnish manufacturer are expected to retail in the US for around $68. The said price is likely to be sans taxes. Both phones including the latter’s dual SIM version will go on sale during Q3 in red, cyan, white and black color options.