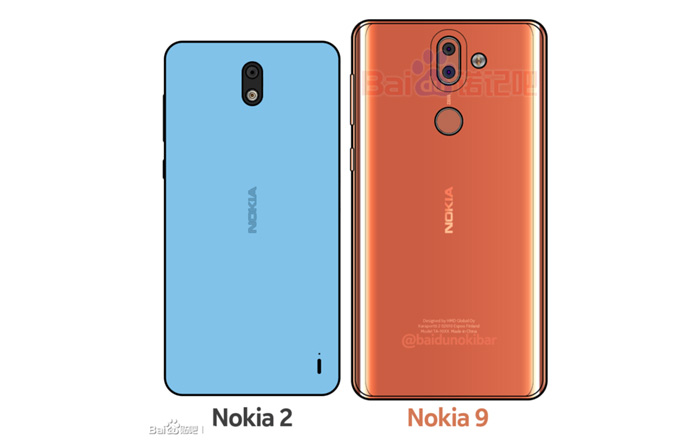 The Nokia 2 and Nokia 9 have both been a frequent presence amongst the rumor mills over the last couple of months. Now the two are starring in the same image leak side-by-side, providing a visual comparison of HMD Global’s cheapest and most expensive phone.

In terms of credentials, the sketch was leaked by a trusted source on Baidu and highlighted by Nokiapoweruser. Plus, the depiction of the Nokia 2 matches the press renders leaked by Evan Blass a few days ago. Both handsets follow the same design language set by its predecessors, so there won’t be any surprises there.

The Nokia 9 appears to have a curved 3D glass back design, all the better to facilitate wireless charging. It’ll probably boast of an OLED screen with skinny borders all around, though it likely won’t be completely bezel-less as some have hoped. This may work in its favor as a counterpoint to other 2017 flagships or against it since it might look outdated.

A Snapdragon 835 processor may find its way inside, the same as the Nokia 8. The upcoming device might share the same Carl Zeiss branding on its dual cameras. There’s a strong chance HMD Global will up its game when it comes to photography while sticking to the same 13MP + 13MP configuration.