The Nokia 2 and Nokia 8 have both gotten leaked within days of each other, complete with specs and renders. The former is believed to be an entry-level model, while the latter is likely a flagship offering.

Starting off with the Nokia 8, reliable tipster Evan Blass has tweeted out two images of the phone in blue and steel colors. The handset looks pretty similar to the Nokia 6, with the notable exception of the 13MP Carl Zeiss dual cameras on its back.

The Nokia 8 will be the first device by the newly resurrected brand to sport such a setup. It might just run on Android 7.1.1 Nougat and get by on a top-of-the-line Snapdragon 835 processor. It’s expected to possess a 5.3-inch QHD screen and either 4GB or 6GB of RAM.

WinFuture recently reported that a retailer had listed the Nokia 8 on its site priced at €589 (roughly $688 or Rs 44190) in blue, gold/blue, gold/copper, and steel colors. The company itself accidentally put up a page for the smartphone on its Chinese website (via Baidu), but took it down within an hour.

Coming to the Nokia 2, the device is probably going to be the firm’s cheapest offering till date. It’s gotten compared to the Nokia 3 in the below sketch. The same 5-inch screen can be seen, but with a rounder design that resembles the Lumia 620. The phone might be powered by a Snapdragon 210 or 212 SoC and feature on-screen navigation buttons. 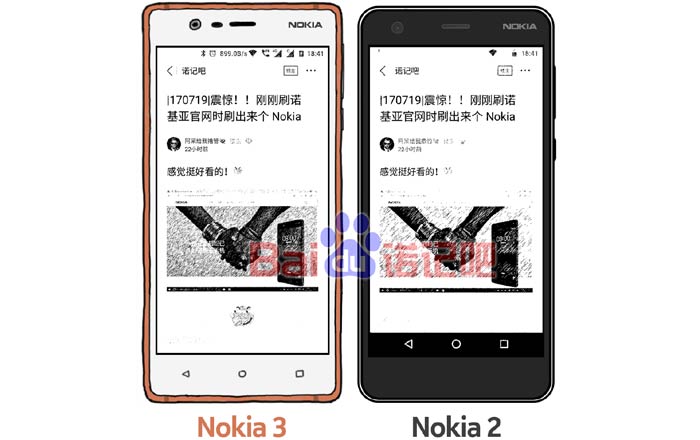 The Nokia 8 might get announced on July 31. There’s no date set in stone for the Nokia 2 yet.