The Nokia 130 feature phone which was unveiled by the company back in August has been released now by Microsoft Mobile. This handset will first be arriving in China, Pakistan and Nigeria in its single and dual SIM forms, and will have its price set at somewhere around the €19 mark.

At that price point, you may not expect it to kick in eye-grabbing features, but there are a few interesting components that have been granted to it nonetheless. First among them is its 1020mAh power pack which promises 36 days of standby time, a whopping 13 hours of talk time, 16 hours of video playback time or 46 hours of music playback time. 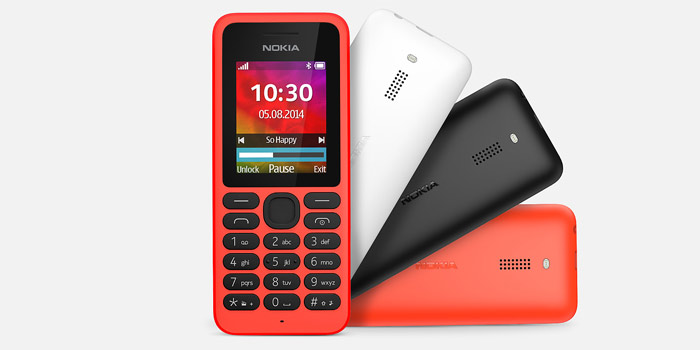 Another aspect which the Nokia 130 can lure buyers with is its rear-mounted flashlight. Moreover, it bears support for FM radio as well, allowing owners to listen in on their local radio channels. It houses on its body a 1.8-inch color display and a microSD card slot which supports 32GB of storage.

Aside from a traditional digit-focused keypad, it even offers a microUSB charging port, allowing you to take advantage of the most common charging method these days. This handset supports Bluetooth connectivity, and runs Nokia’s Series 30+ operating system.

Although it does not have a camera onboard, it does support multimedia experiences through video and music playback. Sized at 106mm x 45.5mm x 13.9mm, it tips the scales at 68.6gms.

The Nokia 130 will be rolled out in nations other than the three above mentioned ones in the weeks to come. Local pricing will be exposed only then.