Nokia 108 is another ultra-affordable feature phone

Nokia is in no mood to lose its grip on the feature phone segment and by releasing the Nokia 108, it has proved that it continues to give as much importance to these handsets as the Asha and Lumia series get. The lineup already boasts of similar devices like 515, 106, 107, 207, 208, 301 and many more that have been designed for people who are not fans of smartphones or need a phone for their alternative numbers. This contender will be made available in single and dual SIM variants.

Although the Nokia 108 is a basic handset, it doesn’t miss out on the essential features. FM radio and an MP3 player have been integrated in it to keep users entertained while on the move, along with some games like Snake. A VGA camera has been tossed in for allowing customers to capture memories in the form of pictures and videos. Also, just like most other phones introduced by the Finnish manufacturer, this device will come drenched in shades of red, black, white, cyan and yellow as well. 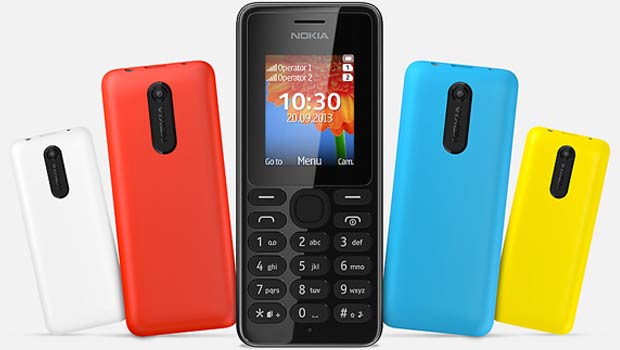 The front panel of the 108 plays host to a 1.8-inch TFT display along with an alphanumeric keyboard. Complete with a flashlight, it has an expansion slot that can extend support to a microSD card of not more than 32GB capacity for letting you carry your digital content along. Nokia’s Slam technology that highly simplifies sharing content over Bluetooth with compatible devices, can also be found in it. Additionally, the single SIM version has a standby time of around 31 days, whereas the dual SIM model can stay in the standby mode for close to 25 days.

The Nokia 108 phone’s recommended price is $29 and it is slated to be made available in the fourth quarter of this year.