Nokia is going strong with feature phones like the newly unveiled 106 and 107 dual SIM, even if it has its eyes on the high end smartphone segment. Forget just impressively specced handsets, the company is rumored to be bent on launching a Windows tablet too. But if staying afloat means keeping the mid-range segment well stocked, the 106 and 107 are not bad for basic devices.

Both are essentially the same phones, though the dual SIM one does differentiate itself from the 106 on some counts. The 107 uses a 1020mAh battery to deliver 2G talk time of roughly 12.5 hours as compared to the other handset’s 800mAh battery and 9.9 hours of talk time on 2G networks. The former offers 4MB of RAM and a memory card slot for adding up to 16GB of extra hoarding space. 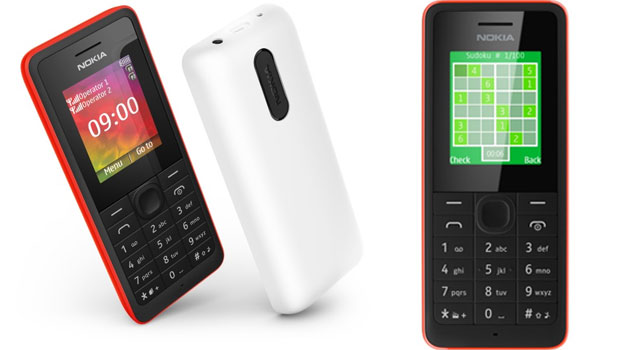 On the other hand, the single SIM device packs in just 384kB RAM. There’s no mention of ROM for either models. Getting down to the specifications that run common in the pair, you’ll find a 1.8-inch 168 x 128p screen and a standard non-QWERTY keypad on the front panel. Nokia hasn’t put a camera on them since they’re meant to be very basic feature phones. FM radio and three color choices of red, black and white are available for each though.

We’ll be seeing these handsets in the market by the third quarter of this year. The 106 and 107 are expected to carry price tags of $23 and $25, respectively. Since dual SIM devices like these do find enthusiastic takers in other markets too, it’s likely that China will not be the only country to welcome it.