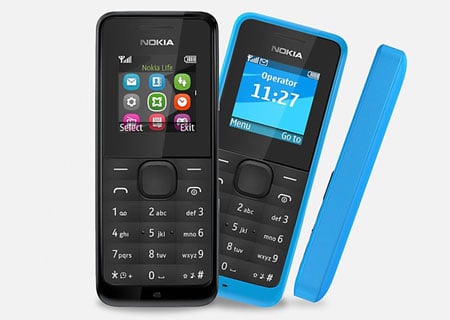 The Nokia 105 has been announced at the MWC in Spain with a broad Q2 2013 release date, and the feature phone is priced at a meager €15, making it the company’s most affordable one in the current range. The Finnish manufacturer says that there are about 2.7 billion people in the world yet to buy a cell phone. It puts this down to financial restraint and is banking on them choosing its latest low-end device.

But the 105 is not just targeted at the monetarily constrained. The company also says that it can appeal to those looking for a backup for emergencies or to carry along when engaging in sports activities. It is basically a completely stripped down device, and unlike a few Asha handsets we’ve seen, doesn’t even come with a camera. 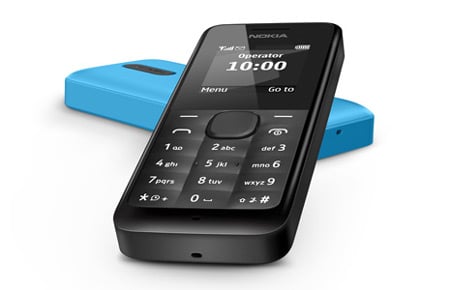 It has a tiny square display spanning 1.4 inches and with a resolution of 128 x 128 pixels. It isn’t a touch screen and subsequently features a 4-way navigation key, with an alphanumeric keypad below it. Just to give an idea of how big it is, it measures 107 x 44.8 x 14.3 millimeters in dimensions and weighs about 70 grams with the battery included.

RAM specs might surprise anyone in a day and age when we’re seeing smartphones get closer to the PC limit. In that respect, the device in question has just 384kB of RAM, an astonishingly tiny amount. And with 8MB of internal storage, no expandability is provided. In fact, a post on the official Nokia Conversations blog says that with the phone, the company is putting to bed black-and-white screens. Were they still around? 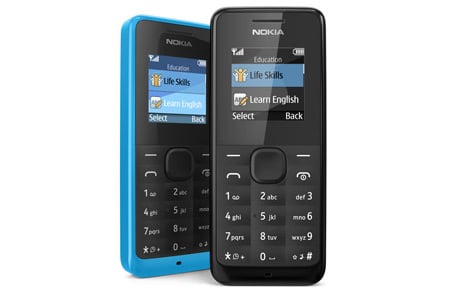 And if that seems limiting or like something from a bygone era, there is a battery of 800mAh capacity. Don’t be fooled by the number though. It is claimed capable of pushing the handset to achieve about 12.5 hours of talk time or 35 days of standby on 2G networks.

The device even forgoes other options such as Bluetooth and Wi-Fi. One of the few interesting features is that the makers have decided to throw in a talking clock. A few games will come pre-loaded and the Nokia Life service will be accessible in supported countries. 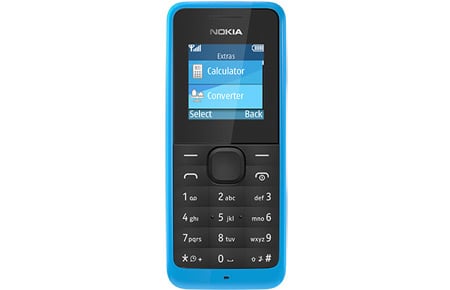 Although we have the Nokia 105 pegged to release in the second quarter this year, exactly which markets it will hit hasn’t been announced yet.

Have a look at the specifications we’ve listed below.