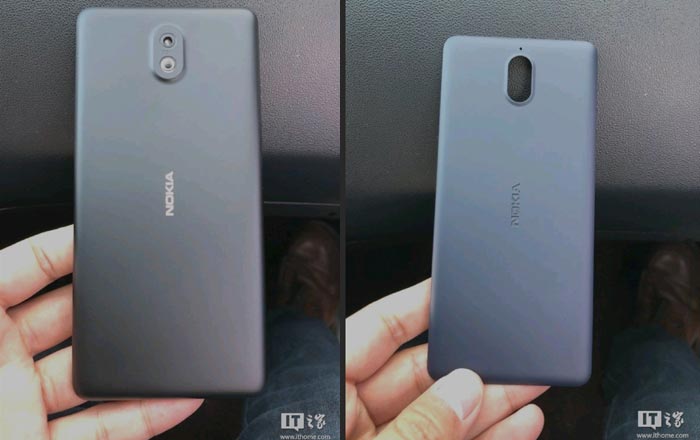 HMD Global’s got a lot of phones due for launch this year, with one of them being its cheapest offering yet. Commonly referred to as the Nokia 1, the device is said to be the brand’s first Android Go handset.

The Nokia 1 has now gotten leaked in the form of 2 photos. Both appear to be the same at first glance, but small differences come to light upon closer inspection. For one, the image on the left has its camera module integrated with the rest of the polycarbonate body.

On the other hand, the snapshot on the right has a piece of glass protecting the lens and flash within. Plus, the Nokia logo comes across as white in one and gray in the next. It’s possible HMD Global is testing 2 or more prototypes of the device and hasn’t settled on a final design yet.

Neither picture is dated though, so it’s possible these pictures are old and HMD Global has in fact begun final production on the Nokia 1. The company is probably going to debut the smartphone in February at the MWC 2018 alongside some other models like the Nokia 4, Nokia 7 Plus, and global version of the Nokia 6 (2018).

The overall look of the Nokia 1 is pretty stark and basic in the above photos. This is to be expected given its low-budget status. Android Go is meant specifically for handsets which offer modest specs. Accordingly, the device may come along offering 1GB of RAM, a 720p IPS display, and 8GB of ROM.

The Nokia 1 is reportedly going to be priced at RUB 5990 (roughly $105 or Rs 6690). We’ll keep you updated the moment there’s any major development regarding the phone.