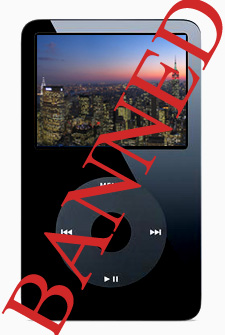 New York City – most populous city in the United States and the land of the Statue of Liberty can now be appropriately touted as the land of NO IPODS.

New York State Senator, Carl Kruger, who represents the 27th district of New York, intends to introduce legislation that would ban the use of handheld devices such as BlackBerries, iPods, and portable video games while crossing streets in major New York cities, such as New York City, Buffalo, and Albany.

And if you think that you are smart and will get away carrying one whilst crossing the street then be ready to be slapped with a $100 fine, plus a criminal court summons.

Kruger, in his defense, says, the government has an obligation to protect its citizens, and that electronic gadgetry has reached a point where it’s creating a major public safety crisis for the government.

Kruger says that while he is trying not to intrude upon personal freedoms of New Yorkers, it becomes difficult to leave the problem alone when pedestrians tune-in to an iPod/Blackberry/cell phone/video game only to walk blythely into a speeding bus or moving automobile to meet with near certain death.

“What’s happening is when they’re tuning into their iPod or BlackBerry cell phone or video game, they’re walking into speeding buses and moving automobiles,” Kruger said in a statement. “It’s becoming a nationwide problem,”

“You can’t be fully aware of your surroundings if you’re fiddling with a BlackBerry, dialing a phone number, playing Super Mario Brothers on a Game Boy, or listening to music on an iPod,” Kruger added.

Though Kruger does not have exact statistics to back his claim, he does mention three accidental deaths of pedestrians in Brooklyn since September 2006, all of whom stepped into traffic even as they were distracted by some electronic gadget or the other. In one such case, Kruger notes that bystanders kept screaming, “watch out”, but in vain.

However there’s someone who’s strongly against Kruger’s safety moves. Noah Budnick, deputy director of advocacy for transportation alternatives in New York City, has come out against the proposal. He said that that iPods and Walkmans don’t kill pedestrians; reckless driving does.

He urged elected officials not to blame pedestrians and instead focus on proactive moves — such as extending the time for crossing streets and passing tougher laws for reckless driving and failing to yield to pedestrians – to ensure streets are safer.

“New York City is a walking city,” he said. “To somehow restrain or prevent pedestrians from engaging in everyday activities is anticity and antipedestrian.”

For a fact, more deaths are caused due to accidents than wars. And the war between Kruger and the rest of the New York state surely seems to be heating up. Keep watching this space for more (but not through your clamshell whilst crossing the streets, cause you’d perhaps be fined).