No Intel Chips Any Longer for OLPC’s XO 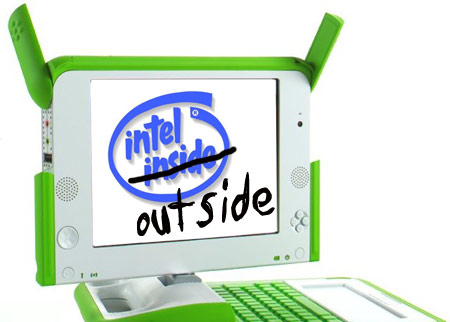 Intel has quit the One Laptop per Child Project after six months. OLPC and Intel had joined hands in July last year.

Intel was asked to discontinue its Classmate PCs program running globally. The chip maker said that the non-proft organization asked them to support the OLPC exclusively, leaving all non-OLPC platforms.

Intel spokesman Chuck Mulloy said, “OLPC had asked Intel to end our support for non-OLPC platforms, including the Classmate PC, and to focus on the OLPC platform exclusively.”

“At the end of the day, we decided we couldn’t accommodate that request,” continued Mulloy.

Initially OLPC was offering XO laptops to children in under-developed and developing countries at $100. However, later Give One Get One laptop scheme was introduced, wherein people can buy one for them and donate one.

No Intel chips in the XO, so what’s the OLPC laptop going to be like now?