Seems as though owners of the LG G3 smartphone are in for some disappointment, even as the company has revealed that the device isn’t currently under consideration for an Android 5.1 update. That means it’s going to be stuck on its 5.0 Lollipop build for quite a long time.

This is leading many to believe that the South Korean giant is planning to directly issue the Android M update for it once it’s out. Now, this latest version of the software is slated to be released late this year by Google, and it will take a few months after that for the LG G3 to receive its new big update.

Until then, owners will have to stay pleased with some minor updates we guess. According to a site named LG Hellas (via GSM Arena), news about the company having decided to skip Android 5.1 for the G3 has come via the official Facebook account of its Greek arm. This is not that big a surprise, since the device has previously gone from Android 4.4.2 KitKat directly to Android 5.0 Lollipop by skipping the minor updates in between. 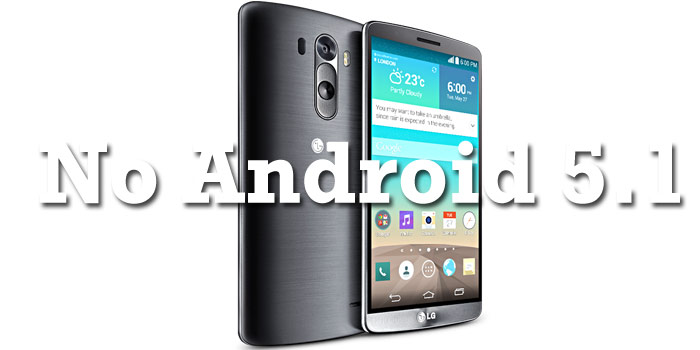 This smartphone was launched by LG back in May last year with a 5.5-inch Quad HD display onboard. It runs on a 2.5GHz quad core Qualcomm Snapdragon 801 processor and offers 2 or 3GB worth of RAM depending upon its storage. A very advanced camera setup is one of its other highlights.

A quick glance at the main specs of the LG G3:

We’ll have more on the next Android update for the LG G3 when additional details regarding the same are out in the open.