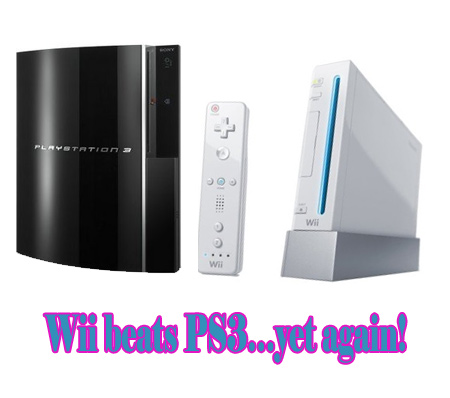 It’s not really funny how Nintendo’s Wii videogame console has grabbed and is dominating the gaming market. Practically every week, there’s some or the other study or analysis that concludes that the Wii has surpassed its rivals Sony PlayStation 3 (PS3) and Microsoft’s Xbox 360, and guess what, this article is no different!

Today, a game magazine publisher Enterbrain revealed that the Wii has beaten the PS3 by over 4:1 in Japan in the time span from April-September 2007.

While approx, 1.6 million units of the Nintendo Wii were sold over 26 weeks in the land of the rising sun, a meager 385,492 units of the PS3 got sold, stated the analysis.

One of the biggest differences between the Wii, PS3 and Xbox 360 are its prices. While the latter two are quite exorbitantly priced, the Wii is one console that any mediocre school-going adolescent can also afford. And this surely is one of the most important reasons why the difference in the price also marks such a massive significant difference in the sales figures too.

Infact, from the very start, Sony’s PS3 didn’t kick off in a very big way thanks to not only its high price but also because of the dearth of strong software game titles.