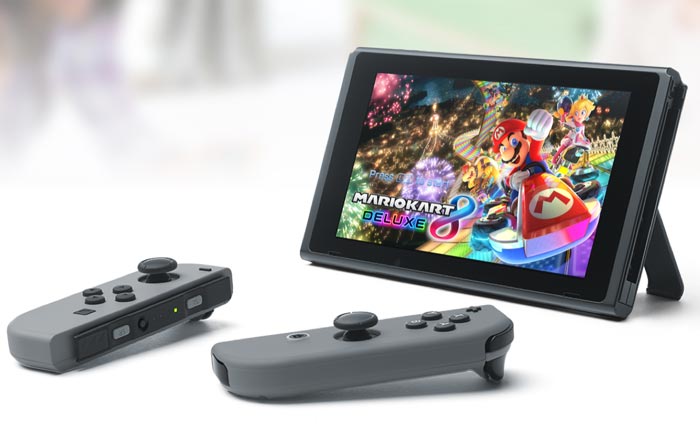 Nintendo has officially announced the price and availability details of its Switch console at a special event in Tokyo. The device will be released on March 3 and is already up for pre-orders.

The Nintendo Switch will set buyers back $299.99 in the US, 29980 yen in Japan, and £279.99 in the UK. The figures are considerably higher than what was expected, resulting in some negative feedback online. It’s too early to tell whether the console will prove to be a hit in spite of this.

Nintendo has a lot riding on the device. Its primary appeal is its portability. Users can plug the main 6.2-inch 720p tablet component into a dock that connects to a TV when playing games at home. They can then utilize it as a handheld gadget if they step outside without interrupting their game.

The latter scenario is made possible by the Joy-Con controllers that attach to the sides of the touchscreen tablet. The controllers will be available in grey or blue/red colors and can detect movement just like the Wii Remote. The second aspect is important since two people can use a controller each for multiplayer games.

The Switch also ships with a Joy‑Con grip so that players can combine both components into a traditional-looking controller. Specs-wise, the console features 32GB of expandable storage and up to 6 hours of battery life. As for games, Nintendo says there are over 80 titles in the pipeline such as Super Mario Odyssey and The Legend of Zelda: Breath of the Wild.

You can pre-order the Nintendo Switch here.