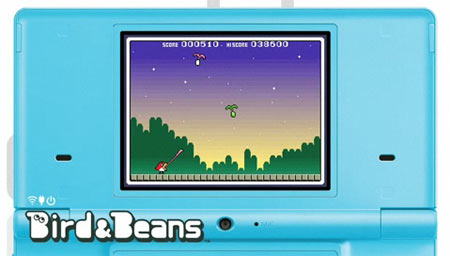 Bird & Beans is a single player game available for 200 DSi points, featuring Pyoro, a small bird with an elastic tongue and “insatiable appetite for beans”. Players need to scramble the beans and the farther the beans the more points they get. Second version of the game feature Pyoro spitting the seeds at high speed to bring down more beans.

Master of Illusion Express: Funny Face is another single player game downloadable for 2000 DSi points. Master if Illusion is a series consisting of magic tricks filled games. Funny Face uses the DSi as prop in a card trick. In this game, players have to draw a face on the screen and face tells the audience the card to be picked. Also included is a bonus Vanishing Card trick.

Next up, the Art Style: Aquia, a single player game, is a fast-paced underwater puzzle game available for 500 DSi points. There are Time Dive and Free Dive modes and Aquarium in which the players can view many different sea animals. The game uses the pick-up-and-play controls.

WarioWare: Snapped is a 1-2 player game, downloadable for 500 points, that uses the DSi camera to put the players in the centre of the mini-games.

Also downloadable is the Nintendo DSi browser which comes free. It is powered by Opera and lets users check their e-mails, get new updates and more from the Internet.

Games for WiiWare and Virtual Console are Equilibrio and Uncharted Water: New Horizons, available for 500 and 800 points, respectively. Equilibrio is 1-4 multiplayer game that uses the Wii Remote or the Wii Balance Board to tilt the playfield and direct the fragile ball away from hurdles like spikes and acid pools. There are 64 levels in the game.

Uncharted Water: New Horizons is a single player game that is set in the period of early 16th century and features six characters and different backgrounds. Featuring the Age of Discovery, the era of European global exploration, the game allows players to sail across the oceans and discover exotic ports and more.