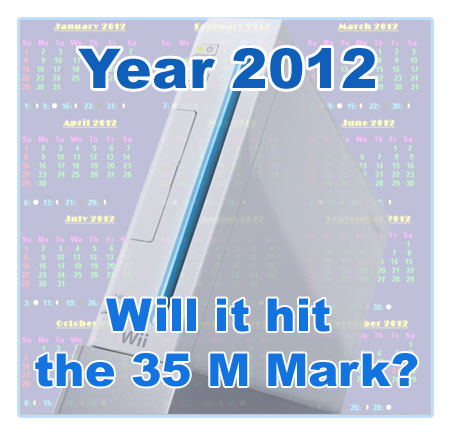 Nintendo Co. is intending to sell around 36 M Wii gaming consoles in the U.S., which is close to the record 38.2 M PlayStation 2 (PS2) units sold by Sony Corp.

Nintendo will achieve this target by 2011 or 2012, George Harrison, marketing chief at Nintendo of America Inc., a unit of Kyoto-based Nintendo Co., stated in an interview from Seattle.

All the same, the first step accomplishing this goal is increasing the production and that is exactly what the company is doing. Nintendo is raising Wii production at factories in China to meet the demand, Harrison said from Seattle. The company has sold 2.5 million Wii consoles in the U.S. since the console was introduced in November, making it the top-seller among the newest generation of machines.

“Demand is much greater than we anticipated,” Harrison noted. “A year ago no one thought we would be in this position.”

According to market researcher NPD Group Inc., based in Port Washington, New York,
U.S. consumers have bought 1.3 million PlayStation 3s since it was launched two days before Wii. On the other hand, Microsoft has sold 5.4 million Xbox 360s, released way ahead in 2005.

The reason behind the boosting demand for the PS2 is primarily the price cuts and the popularity of games such as Activision Inc.’s ‘Guitar Hero.’ The console sells for $149.

Speaking about pricing, sales of Wii also have been bolstered due to its pricing. At $249, it costs less than half the price of a PlayStation 3 and is about $50 less than the cheapest Xbox 360. Nintendo has no plans to sell Wii for less, Harrison said.
Recently Nintendo introduced 14 new games for the Wii platform. The new titles include the in-house developed ‘Mario Strikers Charged’ and ‘Boogie,’ where players can sing and dance to music videos. Most of these new games will take advantage of the Wii’s motion-sensing capabilities. The new games will be released in Q3 of 2007.

Nintendo plans to continue its focus on titles that attract people who typically who are not die-hard gamers and don’t play video games regularly. This implies that there’s little reason for the company to upgrade the console with more powerful chips or better graphics, Harrison said.

“We’re starting to see in the performance of the PS3 and Xbox 360 that that’s not necessarily motivating the market the way it used to,” Harrison maintained. “So we’re going to start work on future technology only when we believe it’s necessary.”

“The 35 million target is a bit too optimistic for now as it seems the Wii is targeting light gamers, but the U.S. market has a lot of hard-core game players,” said Etsuko Tamura, an analyst with Mizuho Investors Securities in Tokyo. “It’s too early to decide whether the Wii will be the winner among game consoles.”

That’s true, only time will tell who is going to emerge as numero uno in the ever-growing and interesting console war.