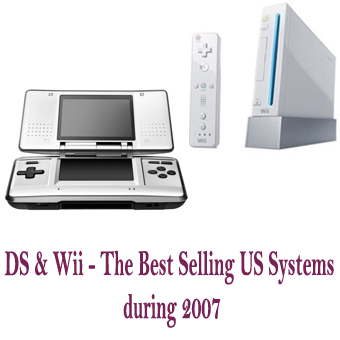 In addition to announcing that Activision is the Number One U.S. Console and Handheld Publisher for 2007, the NPD Group also revealed that the Nintendo Wii and DS were the two best-selling game consoles in the U.S. for the calendar year 2007.

Quoting figures from the NPD Group, Nintendo of America stated that while the DS sold around 8.5 million units last year, the Wii sold approx. 6.3 million pieces. In fact, the sales witnessed a whooping rise towards the end of the year, in November and December, when Nintendo sold 4 million DS handheld and 2.3 million Wii consoles.

Furthermore, Nintendo said it dominated a mighty 52 percent of videogames sales in 2007.

Cammie Dunaway, executive vice president of sales and marketing of Nintendo said, “By the end of 2007 we were sold out of virtually all hardware, and much of our stock of software and accessories was sold out as well.”

However Microsoft does have some reasons to smile as its “Halo 3” game title for the Xbox 360 was the biggest seller of the year with 4.82 million units shipped.

The other striking figures, courtesy NPD Group, which Nintendo has now achieved, are:

Nintendo accounted for 52 percent of all video game hardware systems sold in 2007 – more than all other manufacturers combined.

Since their respective launches, Nintendo has sold more than 17.6 million Nintendo DS systems and nearly 7.4 million Wii systems in the United States alone.

Super Mario Galaxy sold through more than 2.5 million copies since it launched on Nov. 12.

The two games in the Brain Age series each sold about 1 million copies in 2007.

Half of the top 30 best-selling games of 2007 were made for Nintendo systems, including Pokemon Pearl, Pokemon Diamond, Mario Party DS, Guitar Hero III: Legends of Rock and Mario & Sonic at the Olympic Games.

Nintendo continues to dominate the hand-held market: Of the top 30 best-selling portable games sold in 2007, 25 were made for Nintendo DS and another two were made for Game Boy Advance.

Sales of Nintendo DS systems grew 60 percent over those from 2006.

In 2007, the video game industry grew by 43 percent over 2006. Nintendo is responsible for 60 percent of that growth.