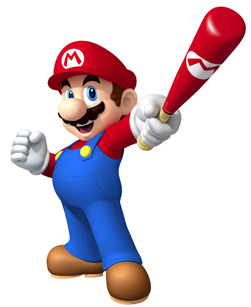 Nintendo has revealed plans for Mario Super Sluggers game for the console Wii.

The new Mario Sluggers game would be based on the favorite American sport baseball. Nintendo claims that the newly announced game will blend rich interactive baseball action with eccentric characters and elements from across the popular Mario universe.

The game will further feature motion-sensitive baseball mechanics. The game can be played by swinging the Wii remote just like a real bat. Players can further wave the remote towards plate to deliver a masterful pitch. The controls are as easy as Wii Sports’ controls.

“Mario is truly a one-of-a-kind character; clearly fans can’t get enough of him and his friends,” said Cammie Dunaway, Nintendo of America’s executive vice president of Sales and Marketing. “We’re giving Wii users brilliant new ways to enjoy him while expanding our series of active-play games.”

Date of release and pricing details of the Mario Super Sluggers have not been announced by Nintendo as of now.