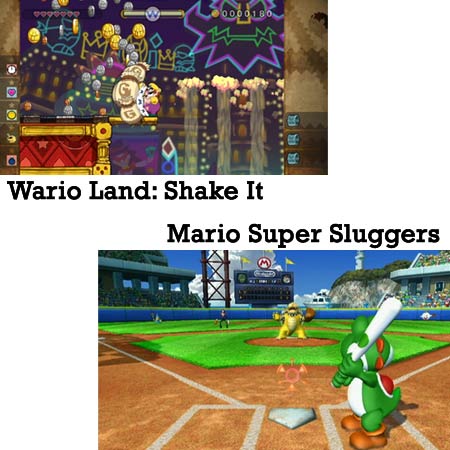 Nintendo has announced to release new games for Wii and DS. Wario Land: Shake It! is the new title which is making its way on Wii console, while Kirby Super Star Ultra and Mystery Case Files are the games which will soon appear on DS. Also Nintendo has revealed the details of the earlier announced title, Mario Super Sluggers. It is scheduled to hit the Wii consoles on August 25.

Wario Land: Shake It! is a classic side-scroller game for the Wii console. Players can enjoy the game with Wii remote by running, jumping and smashing their way through hectic side-scrolling stages. Players can shake the Wii remote to create earthquake, which will lead to beat Wario’s enemies and collect more treasure. Moreover, there are multiple missions which will demand to unlock everything to go to the next level. Wario Land: Shake It! game is coming on Wii console on September 29.

Kirby Super Star Ultra and Mystery Case Files: Million Heir are the two games which are hitting the Nintendo DS on September 29 and September 8 respectively. Kirby Super Star Ultra features lots of adventures wherein Kirby has to run, float, copy enemies and use Helpers to fight King Dedede and Meta Knight. Revenge of the King and Meta Knight Ultra, The Great Cave Offensive and Milky Way Wishes are some of the new modes included in the game. Besides, the main modes, even three new touch-screen-controlled mini-games can be played with up to three friends via DS Download Play. Players can also enjoy Kirby adventures with a friend via local wireless as well.

On the other hand, players can seek-and-solve game play of Mystery Case Files: MillionHeir. Players will have to find out hidden items in a multitude of painted scenes. The story progresses through an interactive detective story investigating a cast of characters and discovering new evidence to find the rightful heir to a million-dollar fortune. For the first time Mystery Case Files game will feature multiplayer mode that use both the touch-screen interface as well as built-in microphone.

Nintendo had already announced Mario Super Sluggers game for Wii, which turns into the into a full-fledged baseball game that can be enjoyed with family as well as friends. The game is similar to the Wii Sports, where players will make a throwing motion with the Wii remote to pitch the baseball and make a swinging motion to swing at the pitch. The game features more than 30 playable Nintendo characters. Nintendo Mario Super Sluggers will ship on August 25.