Nintendo 3DS XL now available in the US 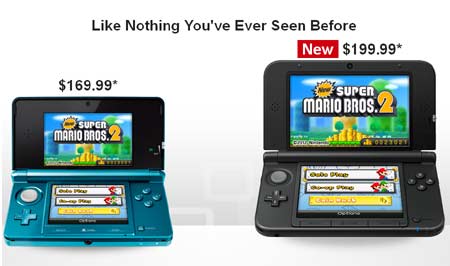 August 19 has come and gone and the Nintendo 3DS XL handheld gaming system is now available for purchase in the US, as previously promised. The new console arrives bearing a screen that’s 90% larger than its predecessor and has already made its debut in Europe and South Africa.

The display affixed to this variant spans 4.88 inches diagonally and proffers improved 3D visuals for an enriched gaming experience. The touchscreen on the lower panel is sized at 4.18 inches. In terms of dimensions, the device measures 156mm x 93mm x 22mm when closed and weighs not more than 336 grams. Complementing its rather ‘big’ form factor is an extended battery life of approximately 6.5 hours when running the 3DS software and up to 10 hours with the DS one.

“The larger screens of the new Nintendo 3DS XL really bring all your games to life,” expressed Scott Moffitt, Nintendo of America’s executive vice president of Sales & Marketing. “The colors and visuals in New Super Mario Bros. 2 look great, especially when all the levels are packed full of gold coins.” 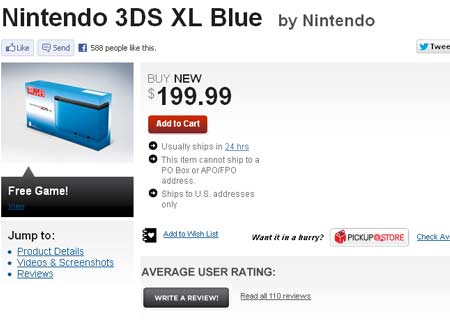 While the 3DS is available in a host of color options, the new version is currently limited to 3 choices, namely red with black, silver with black and blue with black. The follow-up to the popular DS game, New Super Mario Bros. 2, has hit stores as well. This addition is said to be the first in the portable Mario series where 2 players can explore and accomplish levels together as Mario and Luigi over Wi-Fi.

The Nintendo 3DS XL price in the US amounts to $199.99 and it’s available for purchase through the company’s website. The New Super Mario Bros. 2 game can be picked up from various retailers or downloaded via the eShop for $39.99.