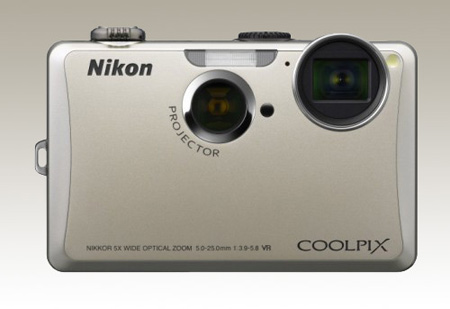 Clicking those fun-filled events and immediately projecting them for mass viewing without a PC or projector may have seemed a thought impossible to many. This notion was broken when Nikon brought in the Coolpix S1000pj that bewildered photography enthusiasts with its built-in projector. Nikon went ahead to enhance some of its features while added in a couple of new ones which resulted into the all new Nikon Coolpix S1100PJ. This successor to Nikon’s revolutionary projector camera sits right at our review desks. To know all about its ups and downs, read on further.

Nikon has dipped the S1100pj in green, silver, violet and black. Though we have been deeming to lay our hands on the green unit, the silver colored one that we received wasn’t disappointing either. The front surface glimmered in glossy silver while the backside maintained a black shade. It was accompanied by a charger, USB cable, stylus, ViewNX2 and PC-PJ Transfer software CDs, and booklets like user manual, quick start guide and PC-PJ Transfer kit.

The front surface has a rounded sensor section with a metallic circumference and a silver sliding cover. This section emerges out of the body on the top right, slightly upwards as the top edge also shows the rounded budge. Moving to the left is the space for flash while just below it lays the round projector area, a smaller circular region with a steel outline which is much thicker. The front surface also leaves room for an auto focus LED and infrared receiver.

The Nikon Coolpix S1100PJ has been marked with Nikon at the top left while Coolpix letterings at its bottom right. The front portion evidently shows the highlight of the device with labels stating built-in projector, 14.1 megapixels, HD movie capability and 3.0 touchscreen. The right side does not feature any controls or slots while the left side affixes an A/V out and a slot to attach the lanyard. The top edge has been embedded with the main power button, zoom ring encircling the shutter button and a dial that focuses the projector image with the main projector button maintained at its center.

The lower edge carves a compartment for the battery and memory card alongside a tripod port and a stand especially crafted to use while mass viewing using the projector. The projector stand just needs a slight push and on doing so it tilts the device for a better projection of images. The backside of the Nikon Coolpix S1100PJ that affixes a 3.0-inch touchscreen is all plasticky in black. The edges pose in both black and silver. Just next to the screen one will find another infrared receiver, speakers, circular recording button in red along with scene and playmode buttons. Below the screen, Nikon is yet again printed in subtle white while above the screen, an inclined portion shows off the flash indicator.

Summing its design attributes, this new projector camera adorns a sophisticated look. We are a little worried about the safety of its projector lens which comes without a protective cover. Moreover, the S1100PJ should have left room for the stylus within the device body itself. Nevertheless, you can attach it with a strap. A hit on the power button and the camera is quick enough to start and display the Nikon logo on its screen. We could also set any image of our choice to be displayed on the welcome screen.

The interface is simple once you get to know it well, so one may need the manual initially. It has been managed by two pull out tabs – lower and left. In the shooting mode, the side tab shows options like macro and flash while the lower tab displays recording, Setup, and more. We could record videos using options such as 720p, VGA and QVGA. It’s through setup that one can customize the welcome screen, date, monitor settings, vibration reduction and AF assist. In the playback mode, the pull up tab shows options such as favorite, delete, slide show, protect print order, paint, retouch, add voice memo and setup. On hitting on playback, we could opt for auto sorting of images, list them by date and also view all our favorite pictures. The scene button takes you to the shooting mode by displaying the shooting mode selection menu and you can also switch between these modes. One may miss a dedicated mode dial as seen in other cameras. We could select from modes like scene, auto, easy auto and smart portrait. 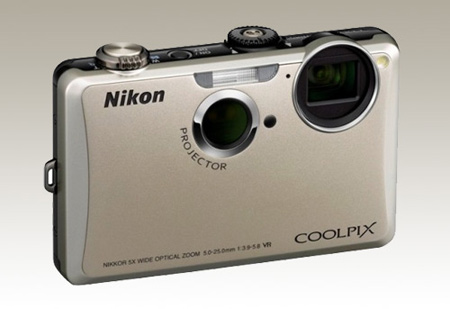 The scene mode offers 17 scenarios to choose from like sports, portrait, landscape, indoor/part, dusk/dawn and so on. Needless to say, the Auto mode came across as the most promising one. You cannot set the shutter speed or aperture directly otherwise but it is only in this mode that one can tweak ISO settings. The lower pull up tab in this mode gives access to self-timer, flash mode, image quality setting, exposure compensation, touch shooting, macro, drive mode, white balance and zoom. Running on the similar lines is the Easy Auto Mode albeit without much controlling options for the user. In the Smart Portrait mode, one will notice features like face priority, smile timer and skin softening.

The key feature of the Nikon Coolpix S1100PJ is the projector featuring 14 ANSI lumens of brightness that takes it a step ahead of its predecessor. So, divulging into it further, the projected image was bright enough and considerably sharp in low light conditions. It does manage to project images pretty well even in a partially bright room. The camera can also be connected to your PC or laptop using the included PC-PJ Transfer software. The process was simple and quick, allowing us to project images up to 47-inches from a distance of 2.4m. We tried exceeding the distance slightly and the projector managed to handle it pretty well. So, you can view all your images, videos and also movies from the laptop onto a big screen. The content can be managed with a remote control which went missing with our unit.

We could adjust the focus and exposure by half pressing the shutter button. Photos can also be clicked with a touch on its screen. The image quality is fairly fine, in fact above average. Images taken indoors as well as outdoors turned out pretty well. The 5x digital zoom adds to the convenience even while recording videos. We did find camera shake issues while the zoom takes some time as you try to stop or zoom out instantly. The 3-inch screen is sharp and clear while it responds fairly well to the stylus too. The camera is capable of taking 220 shots. However, this number drops down as soon as you start recording and projecting content.

Nikon has also added in fun-filled features like it lets us edit images with a pen, use varied stamps, frame and so on. In fact, you can edit an image even while it is being projected and directly mass view the scenario. However, one will notice that the Nikon Coolpix S1100PJ heats up to a considerable extent just like its predecessor after minutes of projecting, of course for obvious reasons. Watching slideshows after we’ve just taken the pictures, altogether on a screen much larger than our monitor screen was an exhilarating experience, that too instantly. We could also rate the images in the playback mode.

We have seen the built-in projector in its predecessor and the S1100pj takes it a step ahead with the incorporated enhanced functionality.

Nikon has refreshed the second model in its projector camera range with an eye-catching design while it has been dipped into unique shades.

The included PC-PJ Transfer software allows connecting it to a laptop/PC and projecting videos and other content.

Though the image quality is above average, we did expect something more on this front.

Nikon should have worked on its battery life which could prove to be an added advantage.

Those not very fond of stylus, may miss the mode dial.

The S1100pj camera is a nifty package with a good balance of design and features at Rs. 19,950. Though the built-in projector is its selling point, the device could come across a tad expensive to those (if any) who liked everything about it but the projector. The image quality is maintained above average while the performance and battery life could have been better. There is nothing out-of-the box about the device albeit it’s mass viewing capability. The Nikon Coolpix S1100PJ has earned a rating of an 8.5 on 10 from us.