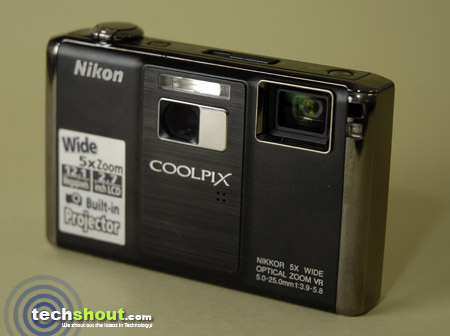 What the 12.1 megapixel Nikon Coolpix S1000pj brings to the table is something we’ll know only after getting our hands all over it. Read on as we divulge in this review, just what captured our hearts and what got a red-eye. Cameras have come a long way through the years, all the while undergoing several modifications and alterations. They have gone from being large devices to small compact ones as well as from film to digital. It is not uncommon to see a camera these days sitting plush in the purse or even the pocket for that matter.

This camera although, offers just a little something more that is usually given amiss in models from any other company. The Coolpix S1000pj is regarded as the world’s first camera to come complete with a built-in projector! With this inclusion, the company’s tag line for the product ‘Your personal theatre on the go’ is very much apt and hence offering photo enthusiasts their own cinema experience anywhere, anytime. The Nikon Coolpix S1000pj Projector camera came to us packed in a neat black box complete with a rechargeable Li-ion battery, battery charger, USB cable, audio/video cable, projector stand, camera strap, software suite installer CD and a remote control. On removing the device, we could espy the camera drenched in black with chrome edges. The company even offers this particular model in a warm silver hue. Also included into the array is a user’s manual as well as a very helpful Quick Start guide which allows even individuals who aren’t too familiar with digital cameras to easily set it up and use. As suggested earlier, the device is highly portable in nature with an overall measurement of around 99.5 x 62.5 x 23 mm and weight of just 155g.

The battery takes less than 3 hours to completely charge and once that is done, it can simply be inserted into the battery compartment which smoothly pops open. You can start taking pictures almost instantly when the camera is switched on. The first thing that we noticed while exploring the various aspects of the camera was that the features weren’t all that advanced for the price it was offered. Sporting a clean look, the front of the camera was only littered with an infrared receiver, lens, integrated flash and projector window. The back of the device wasn’t cluttered with too many buttons as well. There were no complicating menus or options which made clicking pictures all the more easy and fun.

The rear of the camera comprised of two buttons, shooting mode and playback. Via the first option, we could fathom five different modes namely Auto mode, Smart portrait, Subject tracking and finally Movie mode. There is also Scene Auto selector which offers 16 handy scene modes for various environments, settings and conditions. A minus point to the camera is that there is no dedicated video button and hence for video shooting, we had to rely on the Movie mode. The playback button lets you view all your captured pictures and videos on a clear 2.7-inch high-resolution LCD monitor with an anti-reflection coated cover. Through the multi-selector, you can access the Flash mode, Exposure compensation, Macro mode, self timer of 10 or 2 seconds and an OK button in the middle. Situated just below are the Menu and Delete buttons. The menu is your portal to a host of extra features which will make your pictures stand out in any situation. From there you can also acquire the set up menu in order to change the current date, time and language. The camera also includes a 5-way VR Image Stabilization System and Motion Detection focus tracking which is ideal for sharpening fast-moving subjects.

On top of the Nikon Coolpix S1000pj is a dedicated on/off button which also emits a blinking green light when in standby mode. The camera automatically goes in this particular mode when no operations are performed for about a minute. If there is still no activity carried out with the device for the next three minutes, it turns off automatically. These settings can however be altered in the menu section. Capturing photos are a snap, literally. The shutter-release button located atop the camera is smooth while zooming in and out of pictures can also be carried out with ease. 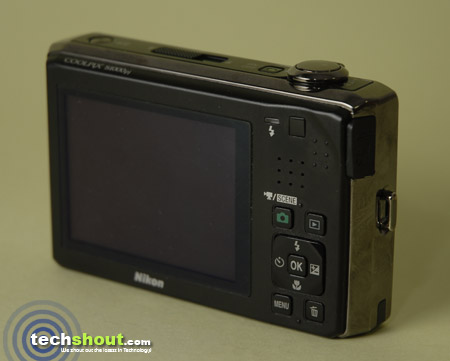 While snapping a picture, the flash lamp indicator shows the status of the flash when the shutter-release button is pressed halfway. If the light is on, then the flash will fire when the picture is taken but if it is completely off, it means that the flash is not required for that particular picture. Everything is clearly indicated on the camera’s LCD screen as well. There, the letters IN will be displayed when the camera’s internal memory is being used so there is no confusion as to which memory is currently being used. We however observed that there is no indicator for showing how much battery is getting consumed. A battery sign only appears on the screen when your battery is low.

Sharing just became much easier with the S1000pj. With the device handy, no need for any computer, projector, display device, digital photo frame or TV. The integrated projector does all the work of showing off the pictures snapped by you. No more huddling around the photographer in order to see your picture. They can now be simply displayed onto any plain or clear surface for the whole group to see. We also noticed that this particular feature comes especially handy during family gatherings where, after the party, the whole group can gather round and view the pictures that were captured during the event. And that’s not all. The digital camera enables you to view not only pictures but videos as well! With this feature, it almost seems like your carrying a mobile cinema around with you.

The projector mode is very easy to utilize and operate. There is even a little black stand provided along with the device which fits snuggly into the camera’s tripod socket. Once that is done, simply hit the dedicated projector button located atop the camera along the shutter release button and voila, you’re ready to go. While viewing pictures and videos in projector mode, the camera’s monitor however turns off. Clear pictures can be viewed on a smooth self-colored background in a darkened area. The projector offers a brightness of up to 10 lumens, image size of 5 to 40 inches and throw distance of approx. 26cm to 2m.

The focus of the projected picture can also be adjusted to your desire by simply shifting the projector focus slider either left or right until the picture is clear. This option is aptly situated on top of the device for easy access. No need to fiddle around with complicated buttons and switches. In addition to adjusting and flipping the pictures directly from the camera, there is also a mini remote control provided with the camera. From this device, you can view all the pictures, zoom in and out as well as play, pause and stop complete videos.

Besides sharing pictures with friends and family through the projector capability of the Nikon Coolpix S1000pj camera, it is also great to share all the fun times with loved ones not present in the room via emails or social networking sites. Plus, it’s wonderful to keep all these pictures stored in the computer for viewing them whenever they please. So in order to do so, a USB cable and CD is provided along with the product. We found that the pictures were easy to store onto the PC without much hindrance or lag once the CD was installed. As the pictures and videos slowly emerged one at a time onto the computer, we found them staring back at us bearing a vibrant, clear, colorful and bright appearance.

Quite a handful of good features all wrapped up within a lightweight form factor.

Not too many intricate features for the price it’s offered.

We feel that the Nikon Coolpix S1000pj camera is a great option for sharing pictures and videos with people in the same room. No more peeping or straining to see just how your picture has emerged on the LCD screen of the camera. A good solution to take along with you to parties, picnics and family functions. Gone are the days where people used to record all their videos and pictures and later show them to others via a VCR, TV, or computer. With this candid solution, simply pick, click and finally display the flick through the projector. The S1000pj can be purchased for a price of $429.95. We see the Nikon camera slowly projecting its way to the top of our charts as we give it a cool 8.7 out of 10.