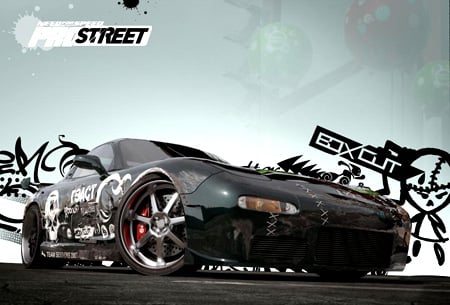 Electronic Arts has announced that Need for Speed ProStreet is the latest game in the renowned Need for Speed (NFS) series. Taking the series in a whole new direction, NFS Prostreet will let gamers indulge in gut-throat competition against the best street racers in a multitude of racing showdowns.

Check out the Need for Speed ProStreet trailer for some exhilarating racing experience:

Executive Producer, Larry LaPierre said, “Need for Speed ProStreet accelerates street racing culture by providing the ultimate stage for the pursuit of street racing supremacy,” said. “This is a game about building the ultimate performance-tuned battle machine, taking it to multi-disciplinary showdowns all over the world and pitting your skills and reputation against the very best street racers.”

Developed by EA Black Box in Vancouver, B.C., Need for Speed ProStreet claims to display immaculate precision and strikingly detailed photo-realistic graphics, effectively transporting you to the center of the action. The “Autosculpt” technology is redefined and taken to an altogether new level, allowing players to directly impact their car’s performance for the first time as well as personalize its appearance. Every dent, every scratch and every crumpled body panel is a battle scar, proof of your commitment and competitive mettle. With an aggressive and skilled AI system, you become immersed in an unmatched believable race experience. Add in a revolutionary online mode that will redefine the meaning of competitive social play, and Need for Speed ProStreet is the ultimate formula for an emotionally charged street racing showdown.

Scheduled to hit stores Fall 2007, Need for Speed ProStreet will be available on the Xbox 360, PlayStation 3 (PS3), Wii, PlayStation 2 (PS2), Nintendo DS, PlayStation Portable (PSP), PC and mobile platforms. So get ready to get the true taste of raw adrenaline and racing with consequences with the new NFS ProStreet title.