If you’re as eagerly anticipating the next Google-branded tablet as we are, any news regarding it will be a welcome one for you; even the fact that it will indeed be called the Nexus 9 since it will have an iPad-rivaling 9-ish inch display. This device is under development from Google and HTC, and if this leak is to be believed then it could well see the light of the day in September itself.

When news broke about this apparent tablet back in June this year, it was referred to with the codename Volantis which HTC has given it. Google on the other hand, prefers to call it Flounder it seems, since it has a tradition of codenaming its Nexus devices after sea creatures. 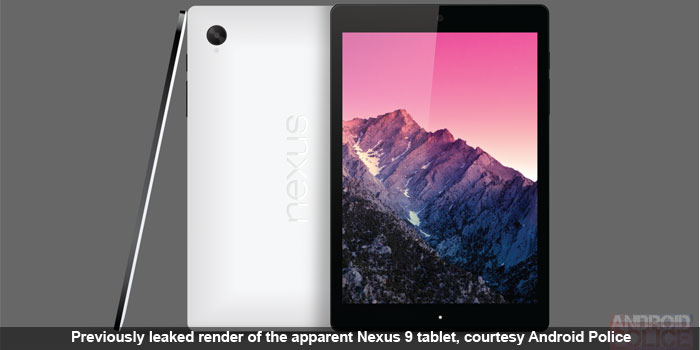 Anyway, what matters is that the final name of the product will be Nexus 9. This comes via Nvidia, which is in the midst of a legal battle with Qualcomm, and whose chipset will be found running inside the slate. Some documents regarding this matter have been analyzed by Bright Side of News, and it’s in these papers that Nvidia quoted the line, ‘The HTC Nexus 9, expected in the third quarter of 2014, is also expected to use the Tegra K1.’

Also Read: Google may have sneaked a Nexus 9 render into its Android L promotional material

The third quarter comes to an end when the month of September ends, which is why there is a possibility of the tablet appearing this month itself. However, there could be a delay in the offing as well since we haven’t been hearing much about it lately.

Whenever the apparent Nexus 9 makes its debut, one thing that’s certain is that it will carry Android L onboard. Let us now cool our heels until Google announces an unveiling event for it.