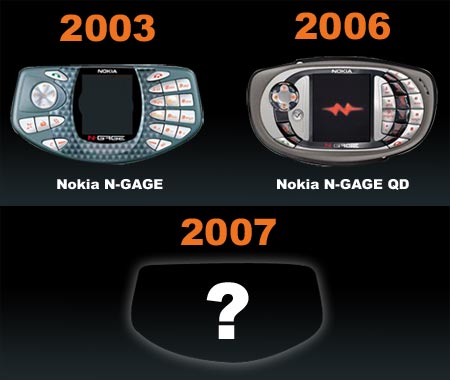 We’ve all heard of the famous proverb ‘once burnt, twice shy,’ guess Nokia does not believe in it. It launched the original N-Gage gaming phone in 2003 and discontinued it in 2004. Not being deterred by the failure of the N-Gage phone, Nokia decided to release N-Gage QD gaming phone in 2006 but soon withdrew it aswell. Now the latest buzz is that Nokia is gearing up for another crack at the handheld gaming market.

Nokia announced that it will be part of a broad strategy called Next Generation gaming, a platform for release early 2007, which will run across various Nokia devices and could conceivably be licensed to third parties as part of the company’s increasing focus on influencing the whole sector through de facto software standards.

Perhaps the main reason to take the platform seriously is that it seems that Sony will publish games on it, despite being Nokia’s keen rival in various fields.

While this will create a common delivery platform and set of interfaces for various devices, mirroring Nokia’s strategy in content downloads and other areas, it will also include specific gaming-oriented devices based on an evolved version of the N-Gage architecture, and probably carrying the same brand, despite its poor associations for many games developers.

Let’s now throw some light on what the new phone will have which the initial two, N-Gage and QD phones did not possess.

To begin with, the N-Gage and QD were not actually games consoles but standard Nokia Symbian Series 60 smartphones with horizontal casings, with no specialist gaming hardware. The Next Gen platform, according to resources, will consist of Series 60 3rd Edition smartphones, and will include the new games-specific software as well as optimized hardware.

Their processors will run three or four times faster than those in the N-Gage, and many will have 3D graphics chips. Old games will not be compatible, because new smartphones use smaller miniSD and microSD memory cards rather than MMC gamecards, plus the new products will have the latest Symbian operating system, which is not backwards compatible. Although Nokia will continue to support the N-Gage Arena – the world’s first mobile online gaming community and a rival to Microsoft Xbox Live.

The Next Gen software platform will come pre-installed on various Symbian S60 3rd Edition smartphones, with varying degrees of specific focus on gaming. The software will allow people to buy Next Gen games as downloads to their smartphone through 3G or Wi-Fi, or as downloads to the PC which can then be transferred to the phone.

Moving away from the downloads, the Next Gen application also has extensive community facilities, allowing users to send messages to friends, view message boards, leave and read reviews of games, challenge people to online game matches, and see which games other people have, so they know who to challenge. While Nokia is most famous for its gaming failures, because of NGage, it has some powerful building blocks to strengthen Next Gen.

One of these is Arena, which is based on the online gaming network SNAP, which Nokia purchased from Sega in 2003. Although Nokia has dropped no hints about which devices will support Next Gen -and whether that and N-Gage will be used as primary or just secondary brands, but the most likely early candidates are the N93 and N95.

The N93 already comes pre-loaded with a demonstration of one of the Next Gen games, a sci-fi racer called System Rush, and has a 3D chip. The N93 and N95 also contain TV Out sockets which can be used to play games (or surf the web) on television sets, with the phone acting as the joypad and games system rolled into one.

Well let’s just hope that this time around Nokia’s so called Next Generation gaming strategy works well with the consumers.

P.S:- I have this Nokia QD dumped somewhere in my cupboard which I truly refuse to use and no buyers too (for obvious reasons). Could Nokia be generous enough to replace it with their soon to-be-launched Next Generation device?