The device that’s apparently supposed to succeed the current iPad Mini has been showcased by a leaked image which also features two other alleged Apple devices. What’s interesting is that we’re seeing for the first time the new version of the company’s small tablet and that too, equipped with the Touch ID fingerprint scanning system.

Sitting alongside it in the image which comes from Apple.club.tw (via Mac Rumors) are the apparent iPhone 6 and iPad Air 2 gadgets, about which we’ve heard in the past. The next-gen iPad Mini on the other hand has been out of the rumor mills till now. Not much about it is being made apparent by the leaked image, but there is now clarity to the possibility of Apple maintaining the iPhone 5S’ Touch ID feature on future devices. 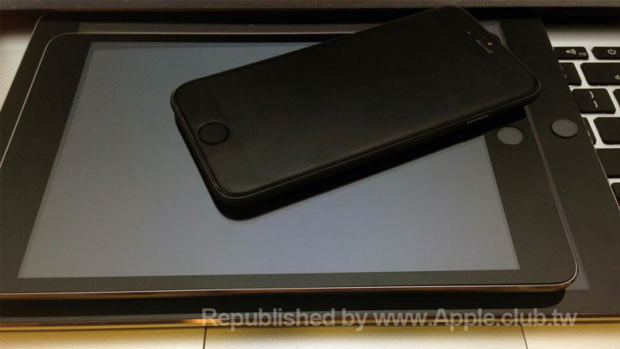 For those unaware, this fingerprint scanning system adds another dimension to the security of your devices, as only recognized fingertips are allowed to unlock and make payments through them. HTC and Samsung had also followed up this trait with their One Max and Galaxy S5 handsets.

At this year’s WWDC event, Apple announced that it will be opening up Touch ID for developers of third-party apps to implement the system into their software. This addition will be make its way into Apple devices through the upcoming iOS 8 software update which is slated to arrive in the coming months.

While we are quite certain that Apple will unveil the iPhone 6 sometime around September, we’re not sure when it’s planning to take the wraps off the new iPad Mini. We’ll have more on it when additional details are out.