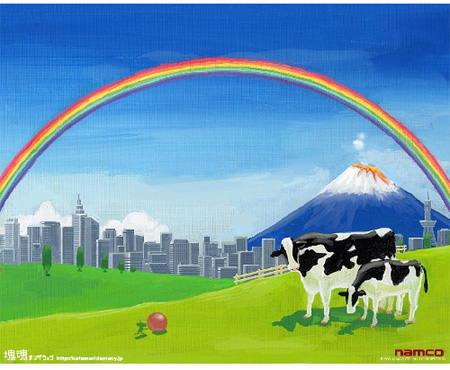 Namco Bandai disclosed that it intends getting Beautiful Katamari Damacy to the Xbox 360 and PlayStation 3 consoles. In addition, the video game company has also suggested that the quirky, ball-rolling franchise will come to Nintendo’s Wii sometime down the track. Namco Bandai made this announcement via Famitsu, a popular Japanese gaming magazine.

The game will feature an online mode along with “beautiful” HD visuals. The Japanese release date is as yet unknown as well as the possibility of a stateside launch, although if the game does superbly in Japan then a North American version seems likely.

Jun Moriwaki, the director of Beautiful Katamari Damacy, said, “The Wii is also one of our platform choices. We would like to challenge with different interfaces such as the keyboard on a PC, or the touch pad on the DS. However, the controller for Wii is quite unique so being able to overcome the different issues will be the key.”

The original Katamari Damacy and the follow-up “We Love Katamari” were exclusive to the PS2 and Me & My Katamari was exclusive to the Sony PSP. They all share similar gameplay mechanics: rolling the Katamari about and collecting stuff from the world to some wacky tunes.