The new Nikon 1 V3 has been thrown out in the open by the Tokyo-based camera giant, and this mirrorless interchangeable lens shooter has been equipped with quite some advanced features. Released alongside a new Nikkor VR 10-30mm f/3.5-5.6 PD-Zoom lens, the camera offers the world’s fastest continuous shooting rate with AF tracking.

Equipped with a compact and lightweight body, the 1 V3 is being claimed by Nikon to offer a tracking performance that is better than even DSLRs. This function is made possible by the 105 focus points (with phase-detection AF) or the 171 focus points (with contrast-detect AF) that it’s capable of delivering. And that in turn allows it to dole out stills at the rate of 20fps with AF and at 60fps when focus is locked. 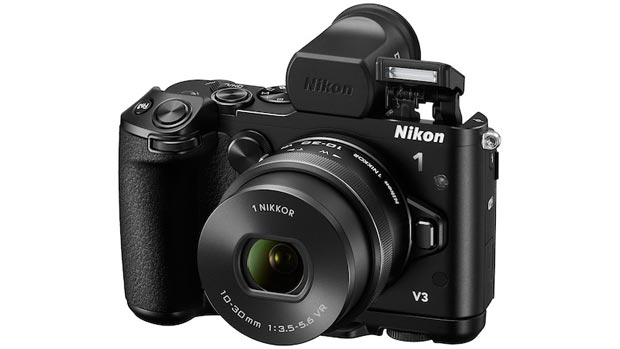 The Nikon 1 V3 features an 18.4MP CMOS sensor with no low-pass filter and a fresh EXPEED 4A image-processing engine. It moreover, also benefits from Wi-Fi-capability. While full HD videos at 60fps are made possible by this shooter as well, there’s even the provision for capturing slow-motion footage at 120fps but at a 720p resolution.

As has been revealed by its maker, the Nikon 1 V3 will be seen arriving in markets this April in the form of a kit containing the body, a 10-30mm lens, its viewfinder and grip. This package will be priced at $1,200.