We’ve seen the LG G3 a number of times before this, but always in shady photographs. This time around however, we have proper press renders of the alleged phone which showcase its seemingly final design. A look at its fresh user interface can also be grabbed in one of the images, but it seems as though it’s a work of some shoddy Photoshop.

Both white and black models of the LG G3 can be seen here, with their rounded rear buttons hogging most of the limelight. One more thing that’s worth pointing out is the infusion of much smaller bezels to the handset as compared to those of the G2. This leak by the way, comes from none other than @EvLeaks.

A while back, some screenshots of the G3’s user interface had slipped out into the open, and now there’s an image which shows the same UI placed on the handset itself. The stretches and cut-outs tell you that the image has gone through some bad editing, however, it appears to give us a good look at just how small the bezels of this new flagship are going to be.

The LG G3 is slated to be revealed on May 27 this year as the company’s first mainstream smartphone to grab a 2K resolution display. We’ll have more on it when additional details are out. 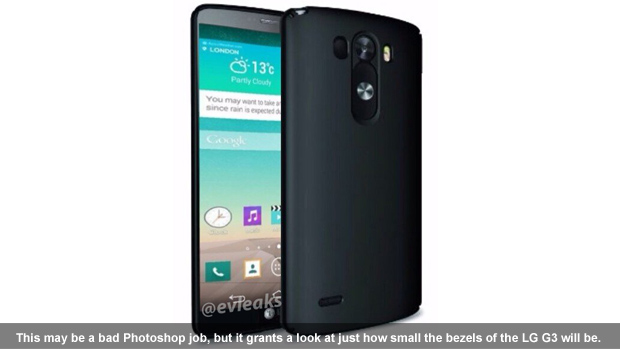 In the meantime, here’s a look at its leaked specs: