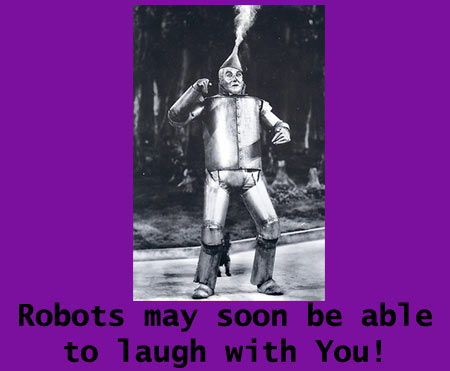 Want to hear a joke? A man walks into a bar, and says “Ouch”. Yes, it’s not your usual A-man-walks-into-a-bar joke, but a whole lot funnier. Now, when it comes to computers, unlike humans, they remain devoid of the so-called funny bone.

Now scientists at the University of Cincinnati, Ohio have built a computer program also known as a “bot” that is able to get a specific type of joke mainly revolving around puns.

According to Julia Taylor and Lawrence Mazlack, the creators of this computer program, budding cyber wit could most definitely lend a sense of humor to physical robots acting as human companions or even helpers.

The researchers hope that in the future physical robots can benefit from this bot, as they too will need to be able to spot jokes if they are to be accepted and not just annoy people.

To teach the program to spot jokes, the researchers first gave it a database of words, extracted from a children’s dictionary to keep things simple, and then supplied examples of how words can be related to one another in different ways to create different meanings.

When presented with a new passage, the program uses that knowledge to work out how those new words relate to each other and what they likely mean. When it finds a word that doesn’t seem to fit with its surroundings, it searches a digital pronunciation guide for similar-sounding words. If any of those words fits in better with the rest of the sentence, it flags the passage as a joke. The result is a bot that “gets” jokes that turn on a simple pun.

Taylor presented the bot at the American Association for Artificial Intelligence conference in Vancouver, Canada, last week but stresses that it does still miss some puns. And of course, there are many jokes that aren’t based on puns, which the bot doesn’t get.

Taylor notes that past experiences are often the key to why some people find things hilarious when others don’t. “If you’ve been in a car accident, you probably won’t find a joke about a car accident funny,” she says.

She is now working to personalize the bot’s sense of humor by flagging certain links between words as either funny or not, depending on the experiences of people it might converse with.

Meanwhile Rada Mihalcea and colleagues at the University of North Texas in Denton have built a different kind of humor-spotting bot. Instead of working out why a sentence might be funny, it learns the frequencies of words that are found in jokes, and uses that to identify humour.

A while ago, we had reported about a group of UK scientists who created a joke-generating software called ‘STANDUP’, however, this latest development on the humor front is surely one that’s way ahead of its time.