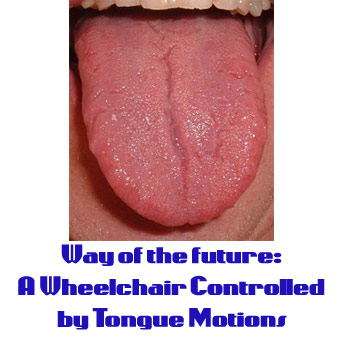 It’s a known fact that eyes are the mirrors of the heart and has the ability to attimes convey what even spoken words fail to express, but little did we know that a human tongue would soon be able to command a thing as tedious as a wheelchair. Revolutionary, isn’t it!

A new technology is being developed through which severely disabled people would be able to control their wheelchairs by simply moving their tongues. A group of scientists at the University of Bristol are inventing a system that will allow people to operate all the functions of an electric wheelchair by eight easy movements of the tongue. There is no magic but pure technology that is employed in this innovative idea. What happens is that the person places a tiny microphone in the ear, which detects every movement of the tongue, after which a computer converts the movements into the appropriate command, such as start, stop or turn the wheelchair around. According to the experts, the most efficient four tongue movements were touching the lower left, centre or right of the mouth – followed by a flick upwards, and licking the top palate. In order to keep the controls convenient, each motion can be made twice in quick succession to create an extra four commands. The vibrations caused by air pressure changes created as the tongue moves, enables the earpiece to sense each different command.

The initiative is led by Ravi Vaidyanathan, who said that this technology would be a blessing for people who are victims of spinal injuries and strokes, leaving them quite seriously disabled. Furthermore, users can also customize the system as per their convenience by selecting which tongue movement should activate which control and perform the appropriate activity thereafter.

For sure, when this technology falls into effect it’s sure to make life easier by leaps and bounds for those confined to the wheelchairs, who have always been dependant on others to move them around. A true reflection of self competence that’s what this technology spells to me.