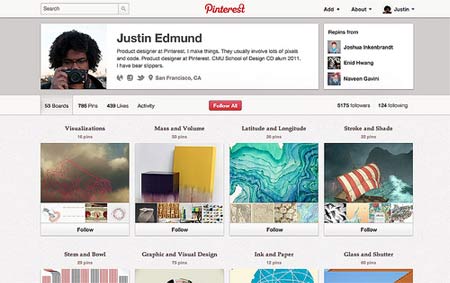 A new version of Pinterest profiles has now been revealed. This endeavor is fueled by the company’s belief that each of its member’s Pinterest boards should aptly display their personal interests. And in order to beautify their profiles, it has unfurled various fresh attributes which include a ‘Repins From’ card, reimagined Boards and an Activity view, among others.

According to a post on the official Pinterest blog, the most recognizable alteration comes in the form of a card dubbed ‘Repins From,’ which is located just next to the basic profile information. It has the ability to display 3 individuals who are frequently repinned from. By utilizing this aspect, members can find new people to follow. The next change is seen in the revamped Boards segment. In this case, the recent pin is brought to the forefront and given a closer focal point.

Furthermore, the overhaul has also brought forth centralized profile navigation, which puts everything in one simplified bar. Thanks to this inclusion, users will be able to seamlessly find their profile’s core data and even perceive just who’s been following them and vice versa, with ease. Additionally, the button situated next to the ‘Edit Profile’ option can be used for rearranging the boards. 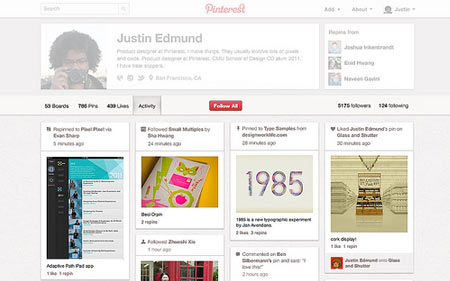 Through the newly added view christened ‘Activity,’ users can catch a glimpse of the various activities their friends have been indulging in while on the social photo sharing website. Also part of the new Pinterest profile is a host of inclusions like profile image, website and description, which can now be spotted right on top of the page. This makes it really easy for visitors to garner a quick insight of the Pinterest member in question.

As the post on the blog concludes, it reveals that the new version of Pinterest profiles is ‘a work in progress’ and will keep on improving as per fan feedback.