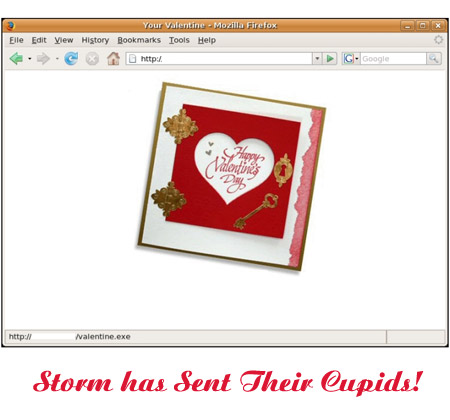 Yesterday, we reported that Chinese security experts have issued a warning which cautions internet users about the increasing Valentine’s Day worms. Here’s yet another update that we received in our inbox, about the latest in the world of malicious worms.

Security giant F-Secure has issued a new advisory, which advices internet users against a new Valentine Storm computer worm which is doing the rounds of the internet.

The advisory bewares users from an e-mail that comes with new subject lines including “Love Rose”, “Rockin’ Valentine”, and “Just You”, directing recipients to a site that hosts a malicious download. According to F-Secure, this is the second spam campaign. The first one went on for less than a month’s time.

In the advisory issued, F-Secure stated:

As of now, the Finnish company has advised users to keep their virus definitions up to date, and computer fixed to avert falling prey to the Storm botnet this Valentine’s Day. So be careful and please don’t break your computer’s heart this 14th Feb.