Samsung infuses all its devices with its proprietary instant messaging app called ChatON, but with refined options like Whatsapp, WeChat and BBM available easily, few people actually end up using it. With an aim to change that perhaps, the company has introduced this service with a big overhaul.

Version 3.5 of the software boasts of a remedy for those with a hateful habit of sending drunk texts. Say you’ve sent a message which you regret and wish to god that there be some way you could undo it. The new recall feature on ChatON lets you do just that. The concerned message can be tapped on and held in order to get the option of recalling it. 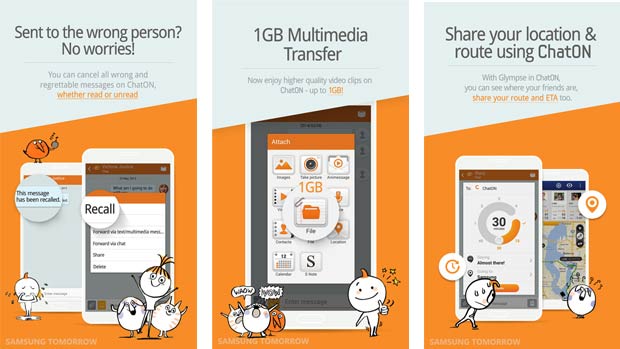 But there’s always the chance of the recipient managing to read it before you pull it off, so there’s that. Moving on, just like in BBM you can now share your location with your ChatON contacts for a specified period of time. This trait is powered by Glympse which itself is an app aimed at real-time location sharing.

After the update, the ChatON app will be able to send files worth of whopping 1GB. Compare that with BBM’s recently added 16MB limit and you’ll why we added that adjective there. Aside from all these changes, the newest version of the app will also feature an increased capacity for group chats and the ability to manage SMS/MMS messages from the same sender in one chat room.

The new and updated ChatON is live now on all the platforms it’s available for.