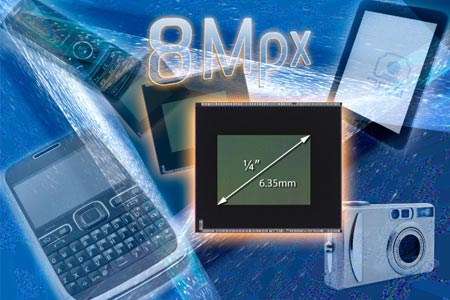 Introducing an innovation to the future of smartphone technology, the Toshiba CMOS image sensor will not only full-fill photo needs, but also video requirements of the users.

Andrew Burt, vice president at Analog and Imaging Business Unit TAEC commented, “As smartphones and other portable digital devices move to smaller form factors, image sensors must also shrink in size. This presents imaging subsystem designers with a challenge: how do you get smaller and smaller image sensors to support higher image resolutions when miniaturization can cause a fall off in performance?”

“Our BSI technology overcomes this problem by deploying the lens on the rear of the sensor, on its silicon substrate, not on the front, where wiring limits light absorption. This positioning boosts light sensitivity and absorption, and allows Toshiba to make finer quality image pixels in smaller-sized CMOS image sensors. This increased sensitivity also makes our BSI CMOS image sensors more suitable for video applications, such as video capture or video chat,” he further stated.

The company expects its technology to be greatly used in the development of smartphones, cameras and tablets. The product features a .25” optical format and 8 megapixels. Also, the device will support 1080p and 720p video capture capabilities up to sixty frames per second.

The Toshiba CMOS image sensor will be available for sampling, priced at $15 for each piece, whereas mass production of the sensor is said to begin sometime towards the end of 2011.