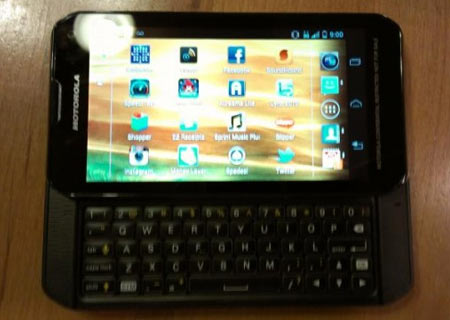 The inexplicable joy of watching gadgets break cover now and again is hitting us once more with the new Sprint Motorola slider phone that has grabbed the limelight. The only proof of its existence is a pretty convincing shot of the device attempting to look innocent as it sneaks out of its hideout.

Android Central welcomed this bit of news from their Rumored Devices forum courtesy of a certain Va1ha11a. According to the post, the handset in question may merely be a test piece that Motorola and the network operator are conspiring to launch. The report even ventures to guess out loud that it could be a 4G LTE compatible slider phone.

Going by what can be gathered from the photo, the device is entirely free of buttons. Well, that should put the iPhone to shame. As for the physical keypad, it is of the QWERTY type, with five rows of keys. There’s no word on the sort of resolution the touchscreen will sport. No hints at the likely moniker for the present either. What else can be expected when a single image is all that can be seen?

Bet we’re not the only ones eager to hear more about the new Sprint Motorola slider phone pictured above – something along the lines of specs, a price and release date. If we were to make a wish list of the specifications bundled in, it would contain a quad core CPU, full HD display and Ice Cream Sandwich. Now is that too much to ask for?