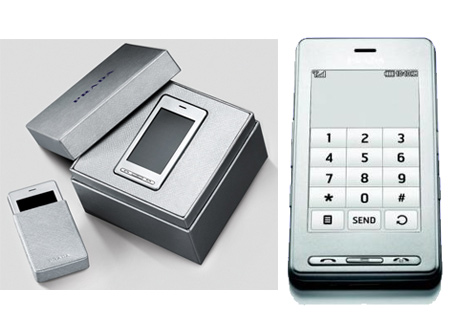 The LG Prada will soon be shipped in an all-new silver color too, announced the Korean manufacturer. So that means that the phone will now be available in two colors, namely black and silver.

The LG Prada (LG-KE850), which was touted as a direct competitor to Apple’s iPhone, now has QWERTY keyboard functionality added to its already exciting touchscreen interface.

The rest of the features such as a 2MP camera, media player, a document viewer and t ri-band of the all-new silver LG Prada remain similar to the device’s black sibling. The phone also includes a Schneider-Kreuznach lens like the ones found in Sony Ericsson’s phones. It measures a compact 98.8 x 54 x 12mm. Though it features an MP3 player, it has no internal memory and depends totally on the expandable memory slot.

The new silver colored LG Prada will go on sale in 18 EU countries, including UK, France, Germany, Spain and Italy by January-end, and will be priced €600. The Asian launch will follow soon.

So what’s your pick, the black-colored LG Prada or the silver-colored one?